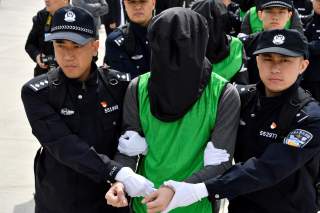 China detained and released former U.S. Air Force colonel and FedEx pilot in Guangzhou last week while he was waiting for a flight to his home in Hong Kong, according to his family’s lawyer in Florida

Todd A. Hohn was returning to Hong Kong after piloting FedEx delivery planes throughout Asia from a FedEx hub in the Guangzhou airport when he was arrested by Chinese authorities, The Wall Street Journal reported citing people familiar with the matter.

“Chinese authorities in Guangzhou detained and later released one of our pilots on bail after an item was found in his luggage prior to a commercial flight,” FedEx said in a statement to The Wall Street Journal. “We are working with the appropriate authorities to gain a better understanding of the facts.”

Chinese authorities detained a FedEx pilot, elevating pressure on the shipping company that is already caught up in the U.S.-China trade war https://t.co/175WBTrdzx

Mr. Hohn was reportedly had “nonmetallic pellets used in low-power replica air guns” in his bag when he was detained. Chinese officials said he was transporting ammunition, and he is now facing a criminal investigation, those familiar with the issue told WSJ.

Border police have been checking bags of passengers traveling to and from mainland China and Hong Kong amid tensions between the two regions.

Hohn’s detention comes amid tight U.S.-China trade-war tensions and as FedEx faces two other investigations by the Chinese government after the country received “complaints from users” and added that foreign operators ought to protect the “legitimate interests” of Chinese companies, according to a June 2 South China Morning Post (SCMP) report citing China’s top postal regulator.

Chinese tech giant Huawei, for example, accused the U.S. shipping company — which used to partner with Amazon — of re-routing of its packages without authorization from Huawei.

“Since the U.S. government put Huawei on its so-called entity list in May this year, FedEx has repeatedly messed about with Huawei’s deliveries … FedEx has threatened China’s national security and has violated Chinese law. These are not accidental business mistakes, but lawbreaking offenses,” commentary from the official Xinhua News Agency read, SCMP.

FedEx is also being investigated by Chinese authorities after a package containing a handgun was sent to a Chinese sporting-goods firm from the United States, according to an August 18 report from SCMP.