China Is Dreaming Up New Means To Defeat The U.S. Military, Is America Prepared? 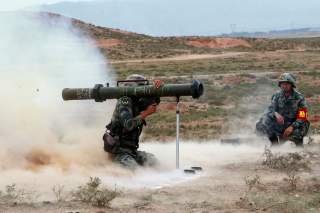 For China, asymmetric warfare represents a tactic with ancient roots that has been successfully applied to the contemporary age. Asymmetric warfare, as seen from Beijing, means using one’s own strengths and capabilities to attack an enemy’s weaknesses. Doing so may involve the use of terrain, tactics, or the application of new or different technologies.

Chinese military thought on asymmetric warfare draws heavily on classical strategy. The authors of The Science of Military Strategy 2013, a leading contemporary military tract, cite Sun Tzu’s directive from The Art of War that in order to exact many victories, one must use asymmetric means (fei duicheng) with surprising military movements. Sun Tzu cautions that an army should employ a combination of direct, normal offensive and defensive moves, and unusual, unexpected, or sudden surprising moves in order to achieve dominance on the battlefield.

Of particular concern to Chinese planners is the so-called “Taiwan scenario,” in which more powerful Chinese forces face a weaker enemy, but a still more powerful enemy force (such as the United States) could intervene in the conflict. Accordingly, Chinese strategists have argued for the use of an array of “assassin’s mace weapons” to disrupt both the economy and communications in the event of war with the United States.

One such weapon is cyber and network attacks. China’s strategists argue that networks are the basic foundation of society and have become critical for national security, as well as a major new domain for military conflict. Researchers with the People’s Liberation Army (PLA) believe that offensive operations against an adversary’s information systems can inflict serious damage on people, the economy and cause great financial losses.

China also is experimenting with taking the effects of a high-altitude detonation of a nuclear weapon that creates a highly destructive electromagnetic pulse (EMP), which could cripple and disrupt vast areas of American infrastructure and technology. There is now a serious competition underway between China and the United States to develop and refine EMP weapons, and the PLA is actively working on this area of technology.

Other forms of electrical-pulse weapons, such as radio-frequency weapons, high-power microwave and particle-beam systems, are likewise a major focus of Chinese development. China’s military leaders see the future of warfare as dependent on such capabilities.

China’s military is also paying greater emphasis to shaping public opinion globally. In a concept known as the “three warfares,” the PLA has made major investments in propaganda, psychological operations and “lawfare.” These three forms of political or information warfare can be performed in unison, or separately, in order to advance the objectives of China’s leaders in peace and in war.

At the same time, China is hard at work on a variety of next-generation weapons that it believes will help it to dominate tomorrow’s conflicts. These include maneuvering hypersonic glide-missile reentry vehicles, which could be used as a strike weapon to penetrate missiles defenses, either on land or at sea. Additionally, like the United States, China is developing an electronic railgun—something that represents an important arena of asymmetric technological competition, because a round from such a weapon can travel at over five thousand miles per hour and, when developed and fielded, would have far greater range than conventional or hypersonic munitions.

Finally, Beijing is focusing on dominating the space domain, which it believes will be crucial to any future war. In particular, PLA strategists believe that the U.S. dependence on satellites and information systems to deploy its forces over extended distances is a weakness that can and should be exploited in conflict.

China’s focus on irregular war represents a challenge to U.S. military doctrine, and necessitates new thinking about inherent vulnerabilities in the current American way of war. To properly defend against Chinese tactics and weapons, the United States will need to protect against network and cyber penetrations by the PLA, harden its capabilities against the potential use of EMP weapons, and use legal mechanisms to challenge Beijing’s efforts to reshape international law. All of this, and more, should be the focus of American military planners as they contemplate how to persevere in a potential future conflict with the PRC.

After all, as the saying goes, in battle, the adversary also gets a vote.

Larry M. Wortzel is president of Asia Strategies and Risks, LLC, and a commissioner on the Congressionally appointed U.S.-China Economic and Security Review Commission. He is the author of the China chapter in The Logic of Irregular War: Asymmetry and America’s Adversaries, out this month from Rowman & Littlefield Publishers, from which this article is drawn. This article first appeared several years ago.