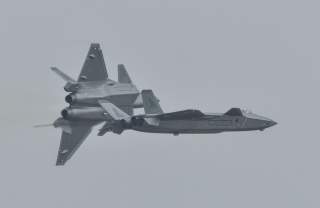 Key Point: Although the J-20 has been pushed into service, recent problems with the J-15 carrier-based fighter suggest that the Chinese answer to the F-22 isn’t quite ready for prime-time.

Recent photos of the J-20 provide an up-close and personal look at the fuselage of the new interceptor. But the photos also appear to show a sensor system that looks awfully similar to the Lockheed Martin Electro-Optical Targeting System (EOTS) on the front of the F-35 Lighting II.