China Has Impressive A2/AD Capabilities, But Smart Positioning Can Let the Navy Avoid them 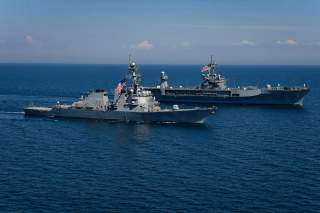 During a recent trip to Australia, Chief of Naval Operations John Richardson took the opportunity to praise a recent cooperative agreement signed by Australia and Papua-New Guinea to jointly modernize and develop the Lombrum Naval Base on Manus Island. “It's a great example of the leadership that Australia and the Royal Australian Navy is exercising in this region,” he offered, but then went further. “From the U.S. Navy's perspective, we look forward to identifying opportunities where we can support that.” The character and extent of such support from the United States should be explored and pursued.

A century ago, both Halford MacKinder and Alfred Mahan identified the criticality of geography in governing the strategies of great powers, a role that has not been vanquished by the rapid and iterative development of generations of technologies that followed. Today, in the face of Chinese investments in anti-access/area denial (A2/AD) weapon systems intended to push American forces back from their forward bases and ports in Korea, Southwest Japan and Guam, it is important to identify those key geographic areas that will challenge China’s strategy by improving U.S. strategic depth; diversifying logistical options for regional air refueling, at sea refueling, and naval weapons reloading; and strengthening the sea and air defenses of allies and U.S. territory.

A modern military port and air hub on Manus Island, lying just north of Papua New Guinea, could become one of these key geographic features. Centrally located in a strategic triangle that spans from Guam, west to the Philippines, and south the northern Australian coast, Manus Island is perfectly situated to support regional refueling operations both in the air and at sea. Should vital U.S. ports and airfields on Guam be attacked by China in an attempt to force a military fait accompli on the United States and its allies, additional military facilities on Manus Island—out of the reach of Chinese A2/AD weapons—could offer strategic depth for continued air and sea operations in this triangle and beyond from reasonable operating ranges (2,300 miles closer to China than Pearl Harbor, HI and 1,300 miles closer than northern Australia). Given this positional military advantage, it would be wise for U.S. military leaders such as Chief of Naval Operations Richardson and Air Force Chief of Staff David Goldfein to consider supporting Australia and Papua-New Guinea in their efforts much as the United States and NATO have responded positionally in Europe to Russian aggression.

As it sits today, Lombrum Naval Base is just a collection of old buildings with a long pier that can support small island patrol boats sticking out into a beautifully sheltered deep-water bay. The port is connected by road to a relatively short 6,100 foot runway nearby. With some dredging and a new longer and larger pier, it could accept large modern warships with deeper drafts. The port, protected by a long sweeping key of coral and sand, would provide calm waters for ships to anchor or go pierside. The existing airfield could provide the means to fly-in munitions for U.S. warships which cannot be reloaded at sea. But with an expanded port and larger, dual-use airfield capable of supporting air refueling tankers and long range strike aircraft, the island could leverage its full strategic potential by creating a nexus for air refueling tankers and strike aircraft where they are most needed, given the Pacific’s geography and operational factors. It would also provide the means to rearm naval ships more quickly if Guam or Japanese ports are lost.

China has been acting aggressively throughout the western Pacific region. From building artificial islands in the South China Sea to declaring Air Defense Identification Zones over the East China Sea, it has sought to establish and enlarge claims of sovereignty in regions where it historically had few interests. In addition, Chinese military forces have been ramping up aggressive activities, to include dangerously close and unprofessional intercepts of U.S. and allied ships and aircraft operating in international waters and airspace. Such aggressive actions must be confronted seriously if future escalations are to be preemptively deterred prior to war, and it is in the interests of the United States and its allies and partners in the region to coordinate their actions and investments in order to achieve the desired effects quickly and efficiently.

An investment in an enlarged and modernized Lombrum Naval Base, with a deeper port, more pier and warehousing space, perhaps even a floating drydock, a fuel storage facility as well as an improved adjacent airfield with more ramp space, could represent a vital hub for alliance and partner operations in the security environment that is emerging today in the western Pacific. Such a joint base would not only represent a significant boost to the local Papua-New Guinea economy, but it would also fundamentally strengthen the forward posture of U.S. and allied forces in the western Pacific region, greatly complicating China’s strategic calculations. Admiral Richardson’s identification of the Australian-Papua New Guinea initiative as a great opportunity demonstrates strategic insight, one that need to be followed up with a solid plan.

The U.S. Navy and U.S. Air Force ought to confer quickly with its ally Australia and its partner Papua-New Guinea to survey the geographical characteristics of the area surrounding the Lombrum Naval Base in order to understand what improvements are needed, how much they will cost and how they might be most efficiently sequenced and then move to support such investments with both aid and contributions of infrastructure. These projects need not be budget breakers, moreover. Models for achieving such cooperation affordably exist in the region, such as USAID’s construction of a 10,000 foot runway and ramp near a deepwater port in the southern Philippines in the early 1990s.

The geography of Manus island lends itself naturally to a competitive strategy to counter China’s anti-access/area denial investments. Australia and Papua-New Guinea have taken the appropriate first step and identified mutual interests. The United States should do so as well.

Jerry Hendrix is a retired Navy captain, former director of the Naval History and Heritage Command and Secretary of the Navy Advisory Panel. He is currently a vice president at the Telemus Group.

Harry Foster is a retired Air Force officer, former director of the Blue Horizons Program at Air University, and is currently a vice president at the Telemus Group.