China Has a Master Economic Plan. Is it Better than America’s? 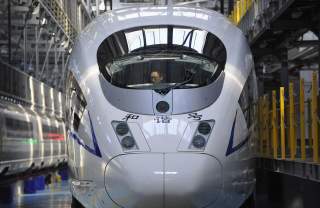 Former Trump White House adviser Steve Bannon told CNBC viewers back in May that China has “a master plan to become an economic hegemon.” I mean, yeah. Sure. A quarter millennium ago, China was the world’s largest economy and it is no doubt eager to regain that position if possible. And not just in terms of nominal GDP, but also as an economy on the technological frontier. Thus its efforts to leap forward in advanced manufacturing and AI.

The former, GDP, is easier to measure than relative tech prowess. Well, not that easy. My AEI colleague Derek Scissors has argued that “claims that China’s economy is already the world’s largest may be exaggerated by up to 30%.” And a comparison of national wealth shows “the American lead expanding.” But clearly the Chinese economy is pretty big and getting bigger and is technologically sophisticated in a way that the Soviet Union never was.

In those terms, America’s geopolitical rivals past and present are different. But they are the same in that both believed in the power of planning. But it’s tough for flawed models to execute even the smartest of plans. And as Bannon later said, “We have all the cards. The Chinese business model cannot continue. It won’t continue.” I think Bannon meant that the Trump trade war will cause the model’s demise rather than its own internal contradictions.

But those contradictions are important: Can China do what the Soviets couldn’t and adapt an innovative market economy — or at least a more open and responsive one — to a totalitarian political system and surveillance state? Is that sort of top-down political economy the equal or superior of America’s in sustaining an ecology of entrepreneurship, imagination, creativity, and dynamism?

Maybe not. As Reuters recently reported, “Chinese productivity growth has gone into reverse for the first time since the Cultural Revolution tore the country apart in the 1970s, according to a new study, highlighting the failure of recent reforms to set China on a sustainable development path.” And it that really surprising? As Scissors notes, “Beijing has long abandoned the pro-market path and shows no true interest in returning to it.”

Maybe the most important move America can make is to heighten the contradictions via market-driven policies that embrace innovation and dynamism. Whatever’s wrong with the American economy can best be fixed by what’s right with the American economy. It’s important trade policy doesn’t undermine those deep strengths by closing America off to competition or portraying the natural churn of a market economy as a market failure. America’s master plan must be keeping its economy open to risk, talent, capital, and the “invisible foot” of failure. Slowing China’s advance is less important and doable than accelerating America’s.