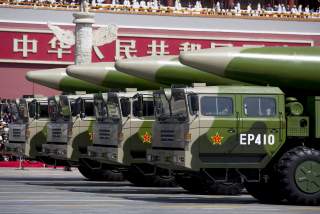 China has deployed anti-ship ballistic missiles to the country's northwest plateau in an apparent attempt to protect them from the U.S. Navy's own missiles.

The deployment reportedly was a response to the appearance of a U.S. Navy warship near the Paracel Islands on Jan. 7, 2019. The destroyer USS McCampbell sailed near the island group as part of a "freedom-of-navigation operation," or FONOP.

The U.S. Navy conducts FONOPs in order to assert its legal right to sail through international waters regardless of which country claims nearby territory. China's state-run Global Times new outlet described McCampbell's appearance near the Paracels as "trespass."

The Alxa base is outside the range of detection by U.S. radars such as the Terminal High Altitude Area Defence system in South Korea, the Hong Kong South China Morning Post pointed out.