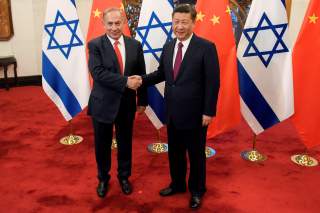 Over the past decade, we’ve seen great power jockeying return to the Eastern Mediterranean with China using its deep pockets to secure influence with key U.S. allies as a means to further its global ambitions and adversely impact the United States’ national security interests.

Similarly, last June, the U.S. Senate cautioned Israel that it had “serious security concerns” about Jerusalem’s deal with Beijing that would see Chinese firms manage the day-to-day operations of Haifa port, which is where the U.S. Navy’s 6th Fleet often conduct port visits. That port deal reflects China’s growing prominent position among Israel’s trading partners, rising to third-largest by 2017, with only the European Union and the United States ahead.

That’s no accident. From 2012 to 2017, China invested $700 billion in the Middle East, representing a 1,700% increase. These funds were largely spent in energy, industry, transportation, and defense fields. Chinese energy investments in Egypt, Greece, and Jordan reached $19.87 billion (beginning in 2005) while its investments in ‘transport’ for Egypt, Greece, and Israel over the same period was $11.29 billion.

These various investments are key to Beijing’s ambitious Belt and Road Initiative that has both land and maritime dimensions. In the Eastern Mediterranean, Greece’s port of Piraeus has now become China’s primary gateway for its exports into Southern, Eastern, and Central European Union nations. This transformation began in 2009 when Athens offered the China Ocean Shipping Company (COSCO) a concession to operate two piers at the container terminal for 35 years. COSCO’s investment in Piraeus immediately brought dividends with the port’s container throughput increasing from 0.7 million twenty-foot equivalent units (TEUs) to 3.6 million by 2013. In 2018, container throughput had soared to 4.9 million TEUs, making Piraeus the second largest Mediterranean port and the 36th biggest globally.

These positive results helped COSCO first secure a 51% and then a 100% ownership stake in Piraeus. It has similarly acquired majority shares in ports terminals at Zeebrugge (85%) and Valencia (51%) and over 35% in facilities in Bilboa, Rotterdam, and Vado Ligure, Italy.

Apart from buying up European ports, China has also focused on developing other infrastructure projects in the region. One example is the high-speed rail connection from Piraeus to Budapest as a way of further penetrating the European market and expanding foreign trade links for Chinese companies. The $2.1 billion tender for that contract was awarded to a Hungarian-Chinese consortium last year with the expectation that China’s EXIM bank will provide the necessary financing now that the Hungarian Foreign Ministry has submitted its loan application.

Beijing targets states with high levels of public debt and low growth for its energy and transport sector deals. These contracts are loans rather than direct investment because China knows that these nations are desperate for any form of investment, even if there's a serious risk that the projects may not generate sufficient revenue to cover repayment.

Last April, Greece’s former defense minister told his American counterpart that Athens wanted the United States to “deploy military assets in Greece on a more permanent basis, not only in Souda Bay but also in Larissa, in Volos, [and] in Alexandroupoli.” While that comment was warmly received, U.S. Ambassador to Greece Geoffrey Pyatt later warned Athens that he hoped that the planned privatization of Alexandroupoli would attract “an American…or a European investor,” rather than a Russian or Chinese one like in Thessaloniki and Piraeus, respectively.

With China continuing its systematic economic infiltration of the region, the United States should be concerned that its allies might find themselves one day in an uncomfortable diplomatic position should Beijing and Washington take differing opinions on significant issues in international affairs. More worryingly, China’s acquisition of commercial ports in the Mediterranean – like in the Indian Ocean – is a calculated move to have “state-owned companies and politically linked private firms…create a network of facilities designed to provide logistical support to Chinese warships.” That same network could be used to track and potentially hinder U.S. naval movements.

The Trump administration’s withdrawal from Kurdish territory in Syria generated uncertainty in Beijing over how quickly its companies could resume business in that war-torn nation. The World Bank estimates that post-conflict economic opportunities could be as high as $400 billion and thus extremely lucrative. By backing President Assad, Beijing has aligned itself with Iran and Russia’s plans for Syria, thereby undercutting its self-professed veneer of neutrality in international affairs while also undermining Washington’s strategic leverage.

As a recent JINSA report highlighted: the Eastern Mediterranean is becoming an epicenter of great power competition, and it bears repeating that the region should again "command [Washington's] attention and resources to address [its] high potential for conflict and cooperation."

LtGen John Toolan Jr., USMC (Ret.) is a former commanding general of the Marine Corps Pacific Forces and a member of the Jewish Institute for National Security of America’s Board of Advisors and its Gemunder Center Hybrid Warfare Policy Project.

Vice Admiral John Bird, USN (Ret.) is former commander of U.S. 7th Fleet. He is currently a member of JINSA’s Board of Advisors and its Gemunder Center Iran Policy Project.

Their article first appeared at RealClearDefense.