China May Be Reaching for Its Rare Earths Gun 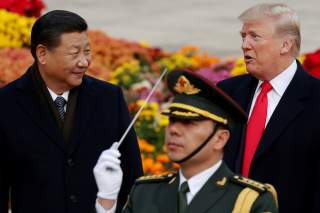 Chinese rhetoric surrounding its willingness to impose restrictions on rare earth exports has escalated. Two different state-controlled entities have strongly hinted that China is prepared to use its near-monopoly in the rare earths market to hit back against the United States in the ongoing trade dispute. The People’s Daily, a state-run publication, published a commentary entitled "United States, Don’t Underestimate China’s Ability to Strike Back." The strongly worded missive echoed previous warnings outlining how rare earths could be used as a "counter weapon" to respond to U.S. tariffs and ongoing demands in trade negotiations. At the same time, China’s National Development and Reform Commission, the country’s top economic planning agency, emphasized the need for China to prioritize domestic needs over the export market in the face of rising domestic demand for rare earths.

Two weeks earlier, Chinese President Xi Jinping and Vice Premier Liu He paid a highly publicized visit to a major rare earths production facility in Jiangxi province that processes the elements for use in defense and avionic systems, sending a strong signal that China was considering using its dominant position in the rare earths sector to retaliate against the United States.

Because of China’s near-monopoly on rare earths processing, any decision by Beijing to ban their export would undoubtedly produce short-term supply disruptions in the numerous high-tech sectors that use them — telecommunications, electric vehicles, renewables and defense, to name a few — although estimates vary about how long that disruption would last. The U.S. government keeps stockpiles of some rare earths, though much of that supply is not fit for final use, and China possesses nearly all global processing capacity. Still, some experts believe that the defense sector, at least, would be able to muddle through in the short term by tapping a combination of public and private stocks. However, timelines are difficult to pinpoint as even the government reportedly has difficulty tracking rare earth inputs throughout the supply chain.

As has often been noted, supplies of the 17 rare earth elements, comprising the lanthanide metals plus scandium and yttrium, are relatively abundant. The eventual diversification of rare earth supplies away from China, a process that is proceeding slowly, is inevitable, especially as global demand grows. Technological advancements are likely to result in a diversification of rare earth supplies away from China as new projects become more economically feasible due to surging demand. Around a decade ago, the market failed to support some alternative supplies, while some plans to develop further alternatives fell by the wayside. And although market realities are different this time, it would still take months to restart even an existing mine, while building a new processing facility would take years. In all, replacing the supply China currently provides, by conservative estimates, would take more than a decade.

Though the trend is toward a more globally diverse market — and there are even proposals for a new processing facility in the United States — alternatives to Chinese processing capacity are, for now, mostly confined to an operation in Malaysia that faces an upcoming licensing issue that could disrupt operations. Should the restrictions take effect, China’s own domestic sector may also come into play. As China continues to consolidate its rare earths sector and cracks down on illegal mining at home, those miners will continue to look for alternative markets. Earlier this month, China banned imports of rare earths from Myanmar — which accounted for roughly half of China’s feedstock of medium and high rare earth elements in 2018 — in an effort to thwart smuggling. Myanmar producers, accordingly, will now be looking for alternative markets as well.

Instead of enticing Washington to return to the negotiation table, potential Chinese restrictions on rare earths would further fan the flames of its trade war with the United States. Until now, China has for the most part refrained from seriously challenging the United States beyond tit-for-tat tariffs and limited regulatory restrictions as it tries to keep the door open for further trade talks. But as Beijing perceives progress in the talks to be less likely, it could become more willing to inflict serious economic pain on the United States. The chances that China would employ the rare earths option will peak if the White Houses follows through with additional bans targeting Chinese tech companies or adds even more tariffs.

In considering the ban, Beijing would be trading the long-term consequences of accelerating the decline of its near-monopoly on the rare earths market for traction in the trade war. The advantage gained in showing a strong intent and a willingness to continue down an aggressive path could leave the United States unsure whether additional harmful restrictions, like restrictions on major U.S. tech firms, could be in the works. The costs of a rare earths ban would be high as it would damage China's long-term strategy of controlling or dominating all aspects of the electric vehicle supply chain. At the same time, it would also incite an international backlash through World Trade Organization measures or possibly push the European Union to take the United States' side in trade talks.

But for Beijing, that would be an acceptable alternative to riskier options for retaliation, including dumping its extensive U.S. Treasury bond holdings or restricting U.S. business operations inside China. Those moves could cause significant market volatility and shake business confidence, undermining its ability to withstand the trade war. Stronger posturing and potential rare earths restrictions could be a potential avenue to extract a trade deal more beneficial to Beijing, one that does not force reform in key strategic sectors. Meanwhile, as China uses nationalist narratives to prepare the public for a further intensification of the trade war, it opens the door for consumer boycotts of American goods, protests or even attacks on U.S. assets and individuals.

China May Be Reaching for Its Rare Earths Gun is republished with the permission of Stratfor Worldview, a geopolitical intelligence and advisory firm.