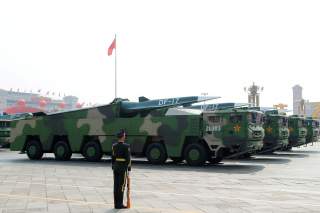 Key point (Note: this was first posted in 2017 and is being recirculated due to breaking news): Hypersonics are set to be a major threat to the U.S. Navy.

In November of 2017, China tested what may become the world’s first operational hypersonic weapon. While Chinese progress in this area surprises no one, the first operational deployment of the weapon will add another weapon to China’s growing antiaccess toolkit, posing a dilemma for U.S. military planners in the Pacific.

Over the past decade China has conducted several tests of potential hypersonic weapons. This new system, however, appears to be a prototype for a deployable capability. As reported by Ankit Panda of the Diplomat, the first test of the DF-17 ballistic missile took place on November 1, 2017, and the second test on November 15. A hypersonic glide vehicle (HGV) detached from the missile during the reentry phase and flew approximately 1,400 kilometers to a target.

The DF-17 appears to be a modified version of a previous People’s Liberation Army Rocket Force (PLARF) missile. It may be possible for the PLARF to modify other, longer-range missiles already in its inventory to carry the HGV. The system can almost certainly deliver either nuclear or conventional payloads, depending on strategic and operational necessity.

U.S. analysts don’t expect the vehicle to enter service until 2020, but by that point the PLARF may have significantly expanded the means through which it can deploy and deliver an HGV. Longer-range missiles would both expand China’s reach farther into the Pacific and make it more difficult for the United States to attack launch points, by enabling bases deep within the Chinese interior.

What Do Hypersonics Do?

While hypersonic cruise missiles exist, the new Chinese HGV deploys from a ballistic missile, then glides to a target on a flight path much different (and much less predictable) than that of a traditional ballistic missile. The glide path is lower and slower than a normal ballistic-missile payload, although still generally higher and faster than a traditional cruise missile. The HGV may have maneuverable characteristics during its terminal phase, which would allow it to strike mobile targets such as aircraft carriers. In the initial launch phase, the HGV closely resembles a ballistic missile, which can complicate tense strategic situations in which the use of nuclear weapons may be in question.

What Strategic Effect Can This Have?

The point of deploying an operational hypersonic system is to undermine currently existing ballistic-missile defense systems. To the extent that South Korea, Japan and, most importantly, the United States depend on such defenses, hypersonics disrupt defensive planning. HGVs travel at extremely high speeds, at relatively low altitudes and on difficult-to-predict trajectories. This makes it difficult for either antiballistic-missile defense systems or traditional surface-to-air missile systems to defeat the weapons on approach. As Antony Dong Wong suggests, HGVs could also directly attack U.S. and allied missile-defense systems, making the entire defensive network more vulnerable to attack.

Of course, the ability of modern missile-defense systems to defeat a volley of ballistic missiles launched in anger remains in deep question. In this sense, hypersonics are an answer to a problem that may not even exist. But when we consider the potential for hypersonic weapons to operate in concert with the rest of China’s A2/AD system, the true value becomes clear. Along with an array of high-accuracy ballistic missiles, cruise missiles deployed from air, sea, land and subsurface launchers, and submarines, China is developing a layered system intended to make it difficult for the United States to even conceive of undertaking high-intensity war.

It remains to be seen how widely China will deploy these weapons. We lack good data on the relative costs of producing and maintaining HGVs and their payloads. HGVs are just as dependent as traditional cruise missiles and ballistic missiles on good targeting data, meaning that they are not miracle weapons. The United States has nonkinetic (primarily electronic) ways of interfering with targeting and communication, complicating the task that HGVs are intended to fulfill.

It is no surprise that China has made significant progress on a hypersonic vehicle. China has worked hard to develop weapons that can keep pace, and even exceed, the most advanced U.S. defensive systems. Hypersonics represent one more tool in China’s system of antiaccess systems. Indeed, they give China the ability to reach out and touch U.S. aircraft carriers and bases at farther distances than previously contemplated. The United States can strike back with its own systems, of course, but on balance the U.S. military demands access, while the Chinese military wins by denying that access.