China Needs to Do Better With Coronavirus—Or Else 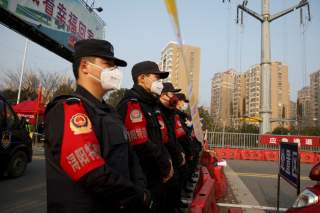 The United Nations’ World Health Organization on Jan. 9 announced an outbreak of a new—or novel—coronavirus (2019-nCoV) in Wuhan, China.

In the three weeks since the announcement, the virus has intensified in China, infecting thousands there and is now spreading across the globe, far beyond its origin in Hubei province.

Indeed, this new coronavirus has taken nearly 200 lives in China.

As Chinese public health officials strive to contain the virus, it’s important to identify three early lessons that can be drawn from the outbreak and the initial response to it to prevent this Chinese epidemic—and others that will undoubtedly follow—from becoming a pandemic in our highly mobile, interconnected world.

1. China’s wild- and exotic-game markets must be shut down—for good.

In China, wild and exotic game is found in so-called “wet markets”—a common food outlet in the country. At these markets, it’s not uncommon for merchants to sell a variety of wild and exotic animals, both dead or alive, for human consumption and perceived medicinal benefits.

In 2017, researchers determined that the virus originated with bats, which are coronavirus carriers, and was transmitted to civet cats, which were then sold at a wet market in China’s Guangdong province.

The virus then passed from those animals to human victims.

Trade in all wild game was reportedly banned in China in 2003 after the SARS epidemic, but restrictions on some animals were loosened over time. It’s not clear how rigorously regulations were enforced.

Consequently, while the exact transmission path of this outbreak is being investigated, the presence of these wild- and exotic-animal markets very likely poses a significant threat to public health in China and beyond.

2. Covering up an outbreak is unacceptable.

The 2019-nCoV virus reportedly surfaced in Wuhan on Dec. 8. The local government waited more than three weeks to notify residents and to act. Then, officials downplayed the seriousness of the disease for several more weeks.

In a stunning admission on Chinese state television, Zhou Xianwang, Wuhan’s mayor, acknowledged that his government failed to provide “timely and satisfactory” information about the outbreak, seeming to fault Beijing for failing to authorize local officials to notify the public of the epidemic.

That’s clearly unacceptable, especially in light of the SARS experience, when a Chinese cover-up also occurred, and in light of the high domestic and international travel rates of the Chinese people today.

To minimize the spread of any potential epidemic, a host country must not only respond rapidly, but provide full transparency to advise not only its own citizenry, but the international community as well.

3. International coordination and cooperation is critical.

An outbreak of a new, virulent virus such as 2019-nCoV is a global public health concern, having now spread to four continents. As such, the outbreak requires a coordinated, cooperative international response to prevent its spread in China and abroad.

As early as Jan. 6, U.S. officials offered to send a team of experts from the Centers for Disease Control and Prevention (CDC) to China to help contain and understand the outbreak. But that initial offer was reportedly rejected.

Despite repeated offers, Chinese officials are still refusing to accept U.S. assistance, though there is reporting that China is considering help from the World Health Organization. If so, Beijing must follow through on this—but as just a first step in cooperating internationally.

Indeed, China’s initial attitude toward international assistance only served to reduce the regime’s ability to respond to this deeply troubling outbreak in a more effective and efficient manner. It has also hampered international public health officials’ efforts to understand this novel virus.

CDC officials—and other foreign health officials—should not have to rely on press reports, Chinese government press releases, or uninvestigated anecdotes to develop an understanding of this outbreak or to build an effective response.

In dealing with an emerging crisis such as this one in its early stages, the fundamentals apply, including embracing good public health practices, full transparency, and international coordination and cooperation.

China needs to do better—or we all could pay a heavy price.

This article first appeared in The Daily Signal on January 30.