China: The Next Aircraft Carrier Superpower? 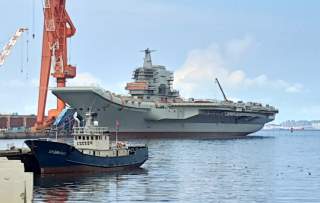 China’s People’s Liberation Army Navy (PLAN) claims to be making significant progress in developing its naval aviation capability both in terms of man and materiel.

The PLAN is about to send its first domestically constructed aircraft carrier—the Type 001A Shandong—on its third set of sea trials. Meanwhile, the PLAN seems to be making significant progress in training its flight deck crews and naval aviators to operate their Shenyang J-15 Flanker-X2 fighters in less than ideal conditions.

“We fly in clear skies. We fly in bad weather. We train day and night, and barely have time to take care of our families," PLAN Lt. Commander Pei Yingjie told the China Daily in an article which was also reposted on the People’s Liberation Army’s China Mil site. "This is because we are clearly aware of the differences between us and our potential opponents in terms of experience and capabilities...We have no alternative but to train hard and make full use of every minute."

While the United States Navy has honed the fine art of naval aviation over the course of decades, the PLAN is a newcomer to the world of carrier operations. The PLAN has had essentially develop a model for carrier operations from scratch, which is not an easy task because even mundane features such as lighting can cause massive headaches. "Landing a plane on a carrier in the dark is the hardest and riskiest of all nighttime operations and much more difficult than landing during the daytime," Captain Lu Zhaohui, a senior J-15 pilot, said. "We have overcome a lot of difficulties to enable our pilots to perform night landings. The first was that we didn't know how to arrange the lights on the carrier's deck or how bright they should be."

Additionally, the Chinese have had develop procedures for landing on a moving flight deck at night, a skill that even a challenge even for American naval aviators to master. "We learn to depend on landing-assistance instruments on the aircraft and the carrier, and on instructions from signal officers," Captain Xu Ying, commander of the J-15 unit, said. "Our aviators need to undertake repeated training procedures in night operations to gain more experience."

However, while the PLAN has been refining its carrier flight deck operations, the service is also developing tactics, techniques and procedures for flying their J-15s during combat operations. Chinese naval aviators have been practicing and refining tactics for both fleet air defense missions and strike missions against both land based and maritime targets. "In the past five years, we have reached the East and South China seas, as well as the western Pacific Ocean. We conducted many tactical drills there and verified our capabilities," Captain Sun Baosong, another senior J-15 pilot, said. "In the future, we will go farther and undertake more missions."

Indeed, China seems to be planning a rapid expansion of its carrier fleet. According to China’s Communist Party-owned Global Times, Shandong is expected to undergo a third set of sea trials as early as this week. The government-owned paper suggested as much because the PLAN had blocked off a large chunk of sea for exercises near the Dalian shipyard where the carrier was built. The new Chinese carrier may conduct aircraft launch and recovery operations during this set of sea trials according to the paper.

In any case, the PLAN is expecting to grow its naval aviation capabilities rapidly. “The training of carrier-borne fighter jet pilots must be accelerated to pave the way for the Navy's aircraft carrier plans," Senior Captain Zhang Zhongming, political commissar of China’s naval aviation base, told the China Daily.