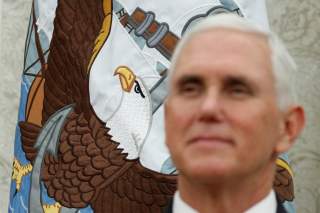 China’s comments came after Pence accused the country of “coercing corporate America” by silencing free speech during his remarks at a Wilson Center event in Washington, D.C.

“His remarks are full of arrogance, prejudice, critical biases and lies,” China Foreign Ministry spokeswoman Hua Chunying said during a Friday press conference, according to a Friday NYT report.

Chinese foreign ministry responds to Pence’s speech: “The U.S. has already abandoned and cast aside its morality and credibility. We hope these Americans can look at themselves in the mirror to fix their own problems and get their own house in order.” https://t.co/2dWqCjmmLE

The spokeswoman added that Pence’s remarks were an attempt to “smear” while distracting from the United States’ problems like racism and wealth inequality, Bloomberg reported.

“The U.S. has already abandoned and cast aside its morality and credibility,” Hua added, according to Bloomberg. “We hope these Americans can look at themselves in the mirror to fix their own problems and get their own house in order.”

“A bunch of American politicians led by Pence have thrown into confusion right and wrong on these issues, made thoughtless remarks and concocted slanders. Any schemes to dishonor China and pour filth on it are destined to be nothing more than vain delusions tossed aside by history,” she concluded, according to NYT.

The vice president rebuked the NBA during his speech for “siding with the Chinese Communist Party and silencing free speech” after the association faced backlash over its handling of a general manager sending out pro-Hong Kong tweets.

Pence also lambasted Nike for promoting “itself as a so called ‘social-justice champion'” while simultaneously “checking its social conscience at the door.”

Vice President @Mike_Pence on the NBA’s failure to stand up to China:

“Some of the NBA’s biggest players and owners, who routinely exercise their freedom to criticize this country, lose their voices when it comes to the freedom and rights of the people of China.” pic.twitter.com/7E10Ysniol

Secretary of State Mike Pompeo similarly criticized China’s suppression of free speech in an Oct. 23 statement that read, “From a foreign policy perspective, we think that it is completely inappropriate for China to attack U.S. businesses whose employees or customers exercise their fundamental freedoms here in the United States.”

Tensions between the U.S. and China have been high as the two countries work to reach follow through with a trade agreement amid an ongoing trade war. Pence has also expressed his support for anti-Beijing protests in Hong Kong.

The two countries tentatively reached “phase one” of a trade agreement on Oct. 11 when Chinese and U.S. officials met in Washington, D.C.

The president told reporters that the two countries came to a “very substantial phase one deal,” which could be signed in November, that will address concerns regarding intellectual property theft and financial services.