Is China Ready To Play Ball On Arms Control? 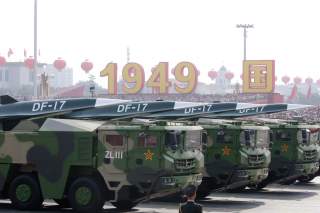 China increasingly finds itself depicted as the bête noire of nuclear arms control. The US government has said the Intermediate-range Nuclear Forces Treaty collapsed because of Chinese actions outside the treaty and not merely Russian violations inside it. Moreover, President Donald Trump has proposed transforming the current strategic nuclear arms agreement between the US and Russia—New START—into a trilateral agreement which covers China’s strategic nuclear forces as well.

On its face, arguing for a more energetic Chinese role in arms control is an easy task. Certainly, China’s conventional missile inventory has developed in leaps and bounds since 1987, when the INF Treaty first went into effect. And in broader geopolitical terms, today’s landscape looks considerably different to the one upon which the arms control regime was originally constructed. In the long run, arms control agreements will become less credible, and less strategically meaningful, if they can’t adapt to reflect the shifting power distribution of the international order.

Besides, arms control has upsides for its participants: it locks in power, rather than merely locking it down, and it reduces the risks of unregulated strategic competition. As Tong Zhao, a senior fellow at Carnegie, argues in the latest issue of Arms Control Today, ‘Over time, China’s own interest will align with arms control for several reasons … [T]he major-power competition between Washington and Beijing is going to be a long-term reality … [I]t is in no one’s interest, including China’s, to allow this competition to become completely uncontrolled and unregulated.’

But that’s a minefield in which we should tread cautiously. A central issue at play concerns the form of controls and regulations, not simply their presence or absence. Western publics, and arms controllers themselves, are familiar with a certain sort of nuclear restraint. That’s the version where formal agreements are hammered out in painstaking—almost litigious—detail around a negotiating table before final signature by senior political figures. Such treaties are written with extraordinary care and have, over time, made an important contribution to nuclear strategic stability.

But that doesn’t leave much space for other forms of restraint. The Asian nuclear order, for example, typically relies on voluntary self-restraint. It doesn’t turn upon finely wrought treaties outlining strict numerical limits on particular weapon systems, counting rules, compliance schedules and verification provisions. Restraint is, instead, demonstrated by small arsenal sizes, slow development of a full nuclear triad (of land-based and sea-based missiles plus strategic bomber aircraft), and declaratory policies which emphasise a reluctance to cross the nuclear threshold.

China is a good example of that Asian model of nuclear order—hence its small nuclear arsenal, few nuclear tests, no-first-use commitment, tolerance of large numerical asymmetries vis-à-vis its possible nuclear rivals, and slow development of its nuclear triad. In a manner characteristic of that Asian order, Chinese nuclear weapons sit in the strategic background rather than the foreground.

What we’re witnessing, then, is the collision of two separate and distinct models of nuclear restraint: on one hand, what we might call the ‘Euro-litigious’ model; on the other, the model of voluntary self-restraint. China may have few runs on the board in relation to the first model, but it has plenty in relation to the second.

So why might China want to sit around the arms control table? Two possible reasons: process and outcomes. Let’s start with process. Sitting at the same table as the US and Russia as the world’s third major player would suggest American and Russian recognition of China as a nuclear peer. That’s a big step up for China—and one that’d throw a wrench into US alliance relationships in Asia. (Tokyo, in particular, would be upset by American recognition of China as a nuclear peer.) But those gains would come at a price, because buying into the Euro-litigious model would devalue China’s own approach. Worse, some would see it as evidence that Beijing might still be drawn into a gradual acceptance of Robert Zoellick’s ‘responsible stakeholder’ standard.

Let’s turn to outcomes. True, the outcomes of negotiations could both shape the nuclear arsenals that China’s potential rivals deploy and enhance strategic stability and predictability. But what might any ‘final agreement’ look like? SALT and START have really been about numbers, about capping and reducing large strategic-range nuclear arsenals—and China doesn’t have one to begin with. Would China be locked into a separate and smaller cap than the other two? Beijing would be sure to see any such outcome as merely one more form of ‘containment’ of China. China’s voluntary acceptance of numerical asymmetry is one thing; the codification of that asymmetry into a formal treaty would be quite another.

As Zhao suggests, it might be possible to devise an agreement based on asymmetrical strengths—regulating China’s land-based missiles and America’s air-based ones, for example—or, alternatively, an agreement that meshes INF-range capabilities alongside strategic ones. But all three countries would probably want to think more carefully about those options. China and Russia would, I think, be reluctant to sign an agreement legitimising deployment of US intermediate-range systems which could target their homelands when their own intermediate-range systems can’t reach the continental US.

And that’s before we even get to verification. Would China accept the sort of detailed, intrusive verification that would have to be part of any agreement, when its own nuclear arsenal is so weak in comparison to America’s and Russia’s? Weaker parties typically rely more on deception than do stronger parties.

Those who favour drawing China into the more formalised arms control model typically deploy an argument about timeliness. The development of MIRV-ed missiles and China’s SSBN force means we should expect some increase in the size of China’s nuclear arsenal in coming years. But analysts argue over how large that increase might be. The director of the US Defense Intelligence Agency said in May 2019 that we could well see a doubling of Chinese warhead numbers—from, roughly, 300 to 600—over the next decade. That’s possible, but earlier DIA estimates tended to err on the high side.

Moreover, what would the increase mean? By itself, it wouldn’t invalidate the concept of voluntary self-restraint—because modernisation, for all nuclear powers, is typically about being able to continue doing tomorrow what they were able to do yesterday. Much of China’s modernisation program fits that description—it’s about ensuring China’s second-strike survivability and its ability to target an adversary with stronger missile defences.

Still, an expanding Chinese arsenal does imply a certain malleability to the concept of self-restraint. China has not traditionally relied much upon nuclear weapons to coerce other players. Its conventional and paramilitary forces are well placed to serve in that mission. And, of course, Beijing is happy to ‘weaponise’ economic ties and Chinese indigenous communities when it needs to. In short, it already has such a range of coercive levers close to hand that an expanding nuclear arsenal—in and of itself, regardless of final size—would suggest a less self-restrained Beijing in future.

Where does that leave us? Nowhere comfortable. Arms control is a form of strategic competition. China knows it has done well in the past from sidestepping that competition. Drawing it in can only be a long-term project—and Beijing’s certainly in no hurry.

Rod Lyon is a senior fellow at ASPI.