The China-Russia Relationship Is More About Survival Than Friendship 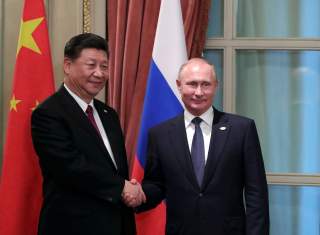 Key point: A true alliance is not in the future.

So, now everybody wants to be Bismarck. They see themselves shaping history by artfully moving big pieces on the geostrategic chessboard. And one gambit they just can’t resist is moving to snip the growing bonds of Sino-Russian cooperation.

My advice to them: Just stop.

Fears of an allied China and Russia running amok around the world are overblown. Indeed, there is so much friction between these “friends,” any attempt to team up would likely give both countries heat rash.

This is an idea that should be dumped into the dustbin before it has any history.

Yes, China and Russia are going to work together to some degree. They have important things in common. For example, both are unaccountable authoritarian regimes that share the Eurasian continent. Other indicators of compatibility: they like doing business with each other, and both like to make up their own rules. Heck, they don’t even have to pretend the liberal world order is a speed-bump in their joint ventures. Both happily engage with the world’s most odious regimes, from Syria to Venezuela. And, of course, neither has any compunction about playing dirty when it serves their interests.

They already play off of each other to frustrate foreign-policy initiatives from Washington. For example, if the United States pressures Russia to vote a certain way on a measure before the UN Security Council, Russia will often don the white hat and vote as we desire, knowing that Beijing will veto the measure for them. Similarly, if the United States leans on Beijing stop giving North Korea some form of aid and comfort, Beijing can go along with the request, knowing that Moscow will pick up the baton for them.

What the neo-Bismarcks need to ask themselves is: Why would Russia or China ever consider giving up these practices? Why would they make the ongoing great power competition easier for the United States? That makes no sense. That is not in their self-interest.

Any notion that the United States could somehow seduce Russian president Vladimir Putin from playing house with Beijing is fanciful. Putin doesn’t do something for nothing; his price would be quite high. He could demand a free hand in Ukraine, or lifting sanctions, or squelching opposition to Nordstream II, or giving Russia free rein in the Middle East. Any of these “deals” would greatly compromise American interests.  Why would we do that? And what, exactly, is Putin going to deliver in return? What leverage does Russia have on Beijing? The answer is not near enough to justify any of these concessions.

On the other hand, what leverage would a Russia-China alliance have on the United States? They wouldn’t jointly threaten Washington with military action. A central element of both their strategies is that they want to win against the United States “without fighting.”

Moscow might be happy if the United States got distracted in a military mix-up with China. Conversely, Beijing could okay with the Americans have an armed confrontation with the Russians. But, neither of them will be volunteering to go first anytime soon.

Even if they linked arms to threaten the United States in tandem, the pain would not be worth the gain. As long as America maintains a credible global and strategic deterrent, a Sino-Russian military one-two punch is pretty much checkmated. Peace through strength really works.

If direct military confrontation is out of bounds, then what can Beijing and Moscow do using economic, political, and diplomatic power or tools of hybrid warfare? The answer to that question is easy: exactly what they are already doing.

We have plenty of evidence of on-going political warfare aimed at the United States, its friends, allies, and interests. Some of these activities are conducted in tandem; some are instances of copy-catism; and some are independent and original.

The political warfare takes many forms—ranging from corrosive economic behavior to aggressive diplomacy to military expansionism and more.

All these malicious efforts are a problem. What they don’t add up to is an existential threat to vital U.S. interests. In other words, we can handle this without sucking up to Putin and undermining our own interests. In fact, we already have a national-security strategy that adequately addresses these concerns.

One more thing inhibiting a Sino-Russian hookup. Russian and Chinese power is largely asymmetrical. They have very different strengths and weaknesses. In coordinating their malicious activities against the United States, they don’t line out very well. China, for example, can’t really do anything substantive to help Russia in Syria. Putin doesn’t have much to offer in the South China Seas or in brokering a U.S.-China trade agreement.

There are also limits to the Sino-Russia era of good feelings. Other than trying to take America down a notch, their global goals are not well aligned. Indeed, the more they try to cooperate, the more their disparate interests will grate on the relationship.

For example, China is meddling more in Central Asia and the Arctic—spaces where Russia was dominant. Moscow has to ask itself: Why is Beijing elbowing in? There is an argument that rather than looking for a strategic partnership, China is just biding its time till Russia implodes, and Beijing steps in and sweeps up the choice pieces.

And, as much as Putin likes to tweak Trump about Moscow’s ties with Beijing, it is becoming more apparent to Washington that Russia is ever more the junior partner. Can Putin really continue to play Robin to a Chinese Batman? As for China, they have to ask: What does Robin really bring to the dynamic-duo?

The world doesn’t require a twenty-first century Bismarck. The United States will do better simply by continuing its strategy of pushing back on Russia and China, while letting them know there’s an off-ramp waiting for them if—and only if—they respect U.S. interests.

Sure, this makes double duty for Washington. The United States has to mitigate Moscow’s efforts to destabilize Europe, even as it pushes for a free and open Indo-Pacific. But these tasks are not beyond our capabilities—and for us the pain is worth the gain.

Rather than try to pry Putin and Xi Jinping apart, Trump should continue to squeeze them from both sides. The natural friction in the Russian and Chinese relationship will prevent them from effectively ganging up on the United States. And it wouldn’t hurt if the United States should find subtle ways to remind them that they would foolish to trust each other too much.

The primary interest of both Putin and Xi is to assure the survival of their regimes. The American squeeze play will leave them with little choice but to accept the fact that America is strong, it’s here to stay, and their regimes have to live with it. This is the only kind of global balancing that will bring about stable relationships in the long-term.