China Thinks Its Stealth Fighters Can Beat the F-35 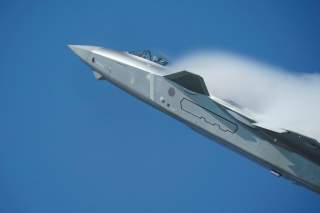 It’s not surprising that China claims that its J-20 stealth fighter is superior to the U.S. F-22 and F-35.

All nations like to claim their weapons are better than those of their adversaries (and if they don’t, it’s because they want more money for the defense budget).

But a Chinese defense magazine has gone a step further by describing how Chinese experts view the J-20 as superior to American jets in many – but not all – categories.

“While a gap remains in some respects between the J-20 and the F-22 and F-35, each has their pros and cons,” says an article in Shipboard Weapons magazine. “For example, the J-20, due to the limitations of engine performance, maybe inferior to F-22 in terms of supersonic cruise capability and super maneuverability, but its significantly larger body size gives it greater fuel capacity and endurance.”

The article also rates the J-20, which entered service earlier this year, as having a larger combat radius than the F-22 and thus less dependent on aerial refueling, according to a translation by the U.S. Army’s Foreign Military Studies Office. And because the J-20 is a newer platform than the F-22, which first took flight in 1997, its electronics, situational awareness and data networking and better, and closer to the capabilities of the newer F-35.

The article also sees the J-20 as broadly comparable to the F-35, and better in some areas such as having a supercruise capability. “Compared with the F-35, whose internal weapons stores are small and which does not have supersonic cruise capability and super maneuverability, the J-20 has an internal weapons bay and a greater mobility advantage,” Shipboard Weapons says. “So not only are there no generational differences with the F-22 and F-35, but the J-20 also has certain advantages. They have the ability to go out in the offshore airspace during the war and perform the tasks of competing with foreign fourth-generation aircraft such as F-22, F-35, etc. to compete for air superiority and to attack enemy air, sea and land targets.”

While the West classifies aircraft such as the F-22, F-35 and J-20 as fifth generation, China categorizes them as fourth generation.

The J-20 will also have a specific mission in any conflict, according to Shipboard Weapons. Using its stealth capabilities, it will destroy enemy airborne early warning aircraft and aerial tankers, which would be indispensable to U.S. air operations in the Western Pacific.” Because these targets operate at ranges relatively close to the effective detection ranges of the J-20, and it is difficult to deploy air cover without gaps for these assets, once they are attacked by the J-20’s air-to-air missiles, it is unlikely that they will be able to be rescued. Whether it is an airborne early warning aircraft or an aerial tanker, the loss of one of these assets will have a very serious effect on the enemy’s entire combat system.”

Deprived of airborne radar aircraft and aerial tankers, the effectiveness of the U.S. stealth fighters will be seriously compromised, in China’s view. “If the enemy cowers in the face of the J-20 and puts the early warning aircraft and the aerial refueling aircraft in the safe rear airspace, it will weaken the support ability for the frontline forces like the F-22 and F-35 fighters, decrease mission capability and even force the front line to be pulled back,” the article says. “This also means that having the J-20 operate in forward near-seas airspace can create a favorable situation, restricting the F-22 and F-35’s range of activities and imposing limits on enemy maritime activity due to the lack of sufficient air support, greatly reducing pressure on our maritime and offshore defense operations.”

If this is indeed China’s strategy for the J-20, it has merit. U.S. fighters do indeed rely heavily on a limited number of airborne radar and tanker aircraft, especially among the vast distances of the Pacific or over, say, Taiwan and the South China Sea.

However, the Shipboard Weapons article does gloss over a few problems. Chief among them is the J-20, an as-yet unproven design whose WS-15 engines have been plagued with reliability issues. A stealth fighter with unreliable engines would prove a poor instrument for crippling American airpower.