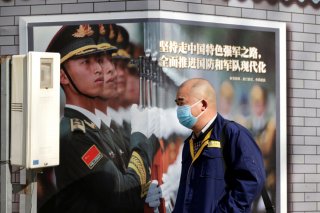 Key point: The United States must support China’s healthcare whistleblowers, citizen journalists, and activists who are persecuted for speaking the truth.

While the Chinese coronavirus dominates the world’s headlines, what may be missed in the tumult is the fact that the virus has become a new front in the Sino-American confrontation.

The crisis is important because it has revealed to many Americans how duplicitous the Chinese Communist Party (CCP) is.  The fact that the CCP lied about the pandemic by minimizing the threat, punishing people who spoke the truth, deliberately concealing information, delaying public announcements, denying a timely investigation by the World Health Organization, and refusing experts from the Centers for Disease Control and Prevention (CDC) entry to the country. As a result, the CCP allowed the virus to spread first within China and then throughout the world. Its outrageous actions are a crime against the health and wellbeing of China’s and the world’s population as well as of their economic livelihood. Now the United States, like so many other countries, has to spend tens of billions—maybe even trillions—of dollars to avoid the financial disaster caused by the CCP recklessness. This has significantly weakened U.S. strength and resources that could have been used to advance American prosperity.

It is horrible, fantastic, and incredible that the world’s population has to take significant steps to protect people from the virus due to the deceit, malpractice, and misgovernment of the CCP. The rest of the world must suffer due to the CCP’s perverse and rotten regime.

The most sinister part is that in the midst of a world health crisis, China has launched a premeditated global propaganda campaign to blame the United States for this pandemic while projecting an image of China’s global leadership in fighting successfully to control the situation and bought the world more time to prepare for it. Zhao Lijian, spokesman of the CCP Foreign Ministry fabricated a blunt lie when he said that the “U.S. army who brought the epidemic to Wuhan.” Many Chinese top diplomats around the world re-tweeted this lie. Meanwhile,  Chinese bots have flooded Twitter to spread misinformation about the pandemic. In addition, Chinese officials have announced that China will use this crisis to catalyze a “Silk Road” of health care.  The significance lies in that it shows the Sino-American confrontation is all azimuths—economic, diplomatic, technological, military, and global opinion.  All point to the fact that China is turning the table on the United States for its long-term strategic goal: world dominance.

The Xi Jinping regime applies this strategy with multifaceted objectives: By blaming the United States, Xi can shift the Chinese people’s focus on fabricated external threats, stimulate ultra-nationalism against America in order to cover up his own mismanagement and missteps in this pandemic crisis. If anyone in China wants to hold Xi accountable for the pandemic, he or she will be treated as a traitor that helps China’s enemy. At the same time, as peoples in China and in the world began to question often-boasted superiority of China governance model due to the disastrous failure of handling the pandemic, Xi needs new narratives to save this perception, and he does not want the pandemic to derail his Chinese dream to dominate the world.

As part of covering up and countermeasures, China last month expelled three Wall Street Journal reporters for the paper’s report about the Chinese virus and pandemic it created. When the United States capped the number of reporters from China’s official news agencies, China retaliated by cracking down on U.S. reporters for the New York Times and Wall Street Journal, among others, while at the same time permitting  favored news outlets like Bloomberg and Forbes to remain is not only a page out of the Soviet’s or Mao’s Cold War playbook, but reveals that China aggressively shapes a narrative and rewards supportive news outlets. Equally, the disinformation campaign launched by the CCP which accused the U.S. military of starting the pandemic in the pantheon of lies may only be rival by the KGB’s lie that the AIDS pandemic was started by the United States.

Thus far, the United States has been too passive in response to China’s actions, although President Donald Trump’s insistence on using the term “the Chinese virus” is right on the target.  Bolder action is needed and warranted given the extent of this conflict.  This includes a vigorous counter-disinformation campaign to fault China’s government for allowing the pandemic to spread unhindered for months.  Not only is it culpable for the spread but its people have tried to blame the United States.  This is an outrageous lie and all countries should call out China on this deceit.  Alarmingly for U.S. interests, China has projected itself as the world’s savior from the Wuhan virus, and has done so without irony, for example, with well-publicized efforts to aid Italy.  The United States must act to aid the world in identifying these lies.  Yet, more significantly, the United States must convey to other countries the perverse nature of Xi Jinping’s regime. The coronavirus is the product of an equally virulent and pernicious Chinese regime and a perfect metaphor for the nature of Xi’s rule.  U.S. leadership and population need to realize that the country is under attack from a regime that allowed a pandemic to occur.  That realization of the size and scope of the China threat may be the only positive element of the pandemic.

Additionally, the United States must continue to pressure China providing critical information about the origin and prevalence of the Chinese virus, including the true death toll, and to allow access of CDC doctors into the epicenter to investigate. The U.S. government should work with America’s allies and the United Nation to investigate who is responsible for the spread and mismanagement of the pandemic. In particular, WHO’s Tedros Adhanom should be investigated and held accountable for colluding with China and allowing the pandemic spread.  At the same time, the United States should consider legal actions against the parties responsible for the disaster, and seek appropriate compensations for the damage it has done to the United States and its people based on the final investigation report.

The United States must support China’s healthcare whistleblowers, citizen journalists, and activists who are persecuted for speaking the truth. It must systematically expose the humanitarian crises and human-rights abuses before, during and after the pandemic, such as the continued imprisonment of over a million Uighur and Kazakh men in concentration camps, oppression of the Muslim minority in Xinjiang, and the suppression of religious and political freedom in China.  Indeed, the CCP is using the pandemic to increase its monitoring and control over the population.

Finally, the United States should seriously rethink its global supply chain and take immediate action to de-couple from China to reduce its dependence on China’s economy. The United States should use this opportunity to work with U.S. allies and free trade partners to create a new global supply chain, leveraging the U.S. market to weaken the Chinese regime while helping itself and its allies to prosper. This could eventually defeat Communist China’s dictatorial plan for the world.

Bradley A. Thayer is a professor of Political Science at the University of Texas San Antonio and is the co-author of How China Sees the World: Han-Centrism and the Balance of Power in International Politics.

Lianchao Han is vice president of Citizen Power Initiatives for China. After the Tiananmen Square Massacre in 1989, Dr. Han was one of the founders of the Independent Federation of Chinese Students and Scholars. He worked in the U.S. Senate for twelve years, as legislative counsel and policy director for three Senators. @thayerhan1.