China vs. Taiwan: Is a War in the Taiwan Strait Possible? 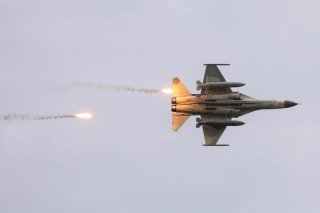 The probability of war, or something like it, is growing in the Taiwan Strait. The effects of such conflict would not remain geographically or functionally confined. Convinced of its power and its righteousness, Beijing is preparing for this eventuality, fearful that prospects for a “peaceful reunification” with the island are slipping from its grasp. For its part, Washington, persuaded it must defend a fellow democracy and its own role as the leading power, also is taking steps to prepare. The United States and China are sleepwalking toward conflict. If not the current Trump administration, then the next administration in Washington likely will be tested severely in the Taiwan Strait and more broadly in the region. In terms of an historic parallel to this moment, Think Pacific, 1940–1941, a circumstance in which American moves to deter imperial Japan through embargo and other means arguably hastened the initiation of conflict.

Events, like a river, build as they move downstream, gaining volume, force, and destructive power as successive tributaries dump into the main channel. As these tributaries feed into the ever-swelling current of Sino-American relations, what was once a manageable flow progressively is becoming alarmingly less so. Though we cannot forecast precisely when and where a breach of the river’s containment structures will occur, once it does everyone will be able to explain why and how it occurred. Five major tributaries are feeding into the increasingly turbulent torrent of Sino-American relations:

Tributary One: The Erosion of the One China Policy. The United States and the People’s Republic of China (PRC) have gone from mutually irritating, but at least minimally shared norms with respect to the management of cross-Strait relations, to very few shared norms and understandings with respect to Taiwan. We see this in current trends with respect to: U.S. weapons transfers to the island; what “unofficial ties” between Washington and Taipei entail; increasingly worrisome Sino-American military shadowboxing in the vicinity of the Taiwan Strait and the East and South China seas; and in Beijing exerting its rapidly tightening control of Hong Kong as a template for how it might handle a coercive takeover of Taiwan. All this is occurring as the overall U.S.-China relationship is becoming more ideologically freighted, increasingly framed in America as a struggle between democracy and tyranny (the “surveillance state”), and in the PRC as a fight for a “rejuvenated China’s rightful place in the world” that Washington seeks to obstruct.

Tributary Two: The Objective of Changing China. To discern what has happened in the first Trump administration, one need not go further than the July 23, 2020, speech entitled “Communist China and the Free World’s Future,” delivered by Secretary of State Mike Pompeo at the Richard Nixon Presidential Library and Museum in Yorba Linda, California. At the symbolic birthplace of the “One China Policy,” the secretary of state rejected the Nixon/Kissinger-Mao/Zhou Enlai shared proposition that Washington and Beijing would deal with each other based on the international actions of each, not on the character of the other’s governance. In his speech, Pompeo changed U.S. objectives by a rhetorical sleight of hand, noting that in his famous 1967 Foreign Affairs article on China policy Richard Nixon had said: “The world cannot be safe until China changes. Thus, our aim, to the extent that we can influence events should be to induce change.” However, the “change” Nixon sought of Beijing was its “turning away from foreign adventure.” Pompeo transmutes Nixon’s call for a change in the PRC’s external behavior into a call for internal political transformation on the Mainland.

The entire thrust of his subsequent dealings with China as president (Kissinger’s 1971 “secret trip” and the 1972 “week that changed the world”) was the realist proposition that international behavior, not internal regime character, were what would and should shape U.S. policy toward Beijing, and vice versa. Pompeo has, in effect, used Nixon’s words to overturn Nixon’s policies or, as the Chinese would say, “used the red flag to oppose the red flag.” In explaining, the current emphasis on changing China, Pompeo said in his speech that “the world was much different then [1967],” going on to proclaim: “The kind of engagement we have been pursuing has not brought the kind of change inside of China that President Nixon hoped to induce….We must induce China to change…We must induce China to change in more creative and assertive ways.”

This fundamental shift in Washington’s articulated purpose is seen in a corresponding change in administration vocabulary. The secretary’s speech itself was entitled “Communist China and the Free World’s Future.” Now, senior Chinese officials are referred to by their communist party titles (e.g., General Secretary), not more civilian-sounding appellations such as “President.” There now is increasing reference to the Communist Party as the decisive instrument of rule, not the nominally civilian government structure. China’s leaders hear all of this and assume replacement of the CCP now is the underlying American purpose.

To the degree that this has become the Trump administration’s purpose, and conceding that what President Donald Trump may actually believe is an open question, a number of queries arise: Is this a feasible objective? What can we expect Beijing’s reactions to be? Does such a U.S. posture strengthen or weaken Xi Jinping in the eyes of his own people? Are Americans going to be willing to sustain the necessary commitment of lives and treasure to such an ambitious (unrealistic) objective? And, with respect to Taiwan, the island becomes a still bigger bone of contention when the issue is about preserving a democracy against the bullying of a communist power. Taiwan easily becomes viewed as the beachhead to change China. None of this lowers the temperature in the Taiwan Strait or enhances Taipei’s security.

Tributary Three: From Reassurance to Deterrence. Since at least 2010, triggered in no small part by Beijing’s actions in the South and East China seas, and long-standing and intensifying close-in U.S. air and naval reconnaissance of maritime China and its nearby periphery, the thrust of policy and behavior in both Beijing and Washington has gradually shifted from military reassurance to deterrence. One of the first things President Nixon and Premier Zhou Enlai did in the 1972 Shanghai Communique was to declare: “[The U.S.] reaffirms its interest in a peaceful settlement of the Taiwan question by the Chinese themselves. With this prospect in mind, it affirms the ultimate objective of the withdrawal of all U.S. forces and military installations from Taiwan.” In these circumstances, U.S. naval activity around Taiwan was reduced, China and Washington exchanged electronic and other intelligence about common threats whether in the Indian Ocean, Central Asia, or the Soviet Far East, and presidents Ronald Reagan and Jimmy Carter were willing to sell carefully selected weapons to the PRC.

Contrast this to today’s ramp-up of air and naval activity by both Beijing and Washington in the western and southern Pacific, increasing PRC military pressure on Taiwan and Japan, U.S. and Chinese nuclear force modernization, growing numbers of short- and intermediate-range missiles in the U.S. and Chinese inventories, and changing warfighting doctrines. China appears prepared to hit large-scale naval assets and US-Allied bases in Asia, and the United States has contingency plans contemplating deep strikes into China’s “rear areas” were conflict to erupt, or even appear imminent. Any such move(s) by either side would almost certainly be considered by the other as a strategic attack producing a rapid escalation. The United States has never directly attacked a nuclear power. In short, both capitals have moved from attempts to reassure each other to deterrence—deterrence rests on threat. Threats can produce what they were designed to avert.

Tributary Four: Diverging Assessments of Who is Strong and Who Is Weak. Deterrence immediately raises the issue of relative strength. Beijing and Washington have divergent assessments of their own power and that of their adversary, each seeming to assume that they can prevail if conflict breaks out. Beijing sees a Washington weakened by two-plus decades of non-stop grinding conflict. It sees a Trump administration that has alienated allies, even as Beijing admits to itself that its neighbors still gravitate toward Washington for protection. At home, the Americans seem distracted and preoccupied with health, economic, and constitutional crises. Ominously, Chinese military thinking over the centuries always has had a role for preemption and attacks of quick decision. “Seize the hour.”

In Washington, there is debate over what the outcomes of a cross-Strait conflict would be, but the operating assumption seems to be that with the military buildup under Trump, the United States still can deter Beijing with respect to Taiwan and, if deterrence fails, prevail. One only has to look at the outcomes in Korea, Vietnam, and Afghanistan to realize this assumption is open to debate if history offers any guide. Two powers, each assuming that it can prevail, makes it uncertain whether deterrence can hold.

Tributary Five: The Tyranny of Diverging Domestic Politics. Foreign policy is substantially driven by domestic imperatives. Domestic forces in each society (the PRC, the United States, and Taiwan) are driving each leadership into a corner from which there is a decreasing prospect for a face-saving exit. In Beijing, Xi Jinping has anchored his regime’s legitimacy in territorial reunification with Taiwan, the broad historical storyline in China being: Mao Zedong threw the foreigners out; Deng Xiaoping and Jiang Zemin brought Hong Kong and Macao back into the motherland’s warm embrace; and now, the question is: “Will Xi Jinping finish the reunification job with Taiwan now that China is strong?” This is a legitimacy trap of Beijing’s own making—but it is real.