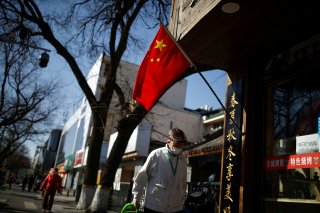 China is ramping up aggressive propaganda efforts to pin the blame for the coronavirus pandemic on the United States.

Less than three months ago, however, when the first cases of COVID-19 showed up, the Chinese government began censoring social media that employed keywords such as “unknown Wuhan pneumonia.” It punished users for “spreading rumors” and fomenting “social unrest.”

A typical hardline authoritarian reaction to an obviously home-grown disaster.

The propaganda campaign began accelerating Jan. 20, when it no longer was possible for China to conceal the coronavirus outbreak.

The communist regime’s highly coordinated approach has been threefold:

Although the U.S. government has tried and usually fails at achieving a whole-of-government approach to messaging, the Chinese government has no qualms about deploying all its assets, a strategy known as “sharp power” as opposed to “soft power” or “smart power.”

In tweets last week, China’s ambassador to South Africa, Lin Songtian, repeated the Foreign Ministry’s official line that a visit by 300 U.S. military athletes to Wuhan caused the coronavirus outbreak. Lin is a key diplomat in dispensing the country’s propaganda, and this line is being touted by Chinese media and diplomats the world over.

Lin also agreed with an outrageous remark by former U.S. Secretary of State Hillary Clinton that Trump is “turning to racist rhetoric” by talking about the Chinese virus.

“It is true. Justice always speak loudly,” Lin said, including a screenshot of Clinton’s tweet and a China News article highlighting her “racist rhetoric” critique of Trump.

For his part, Trump rightly has refused to stop saying that COVID-19 originated in China. He indicated Wednesday that he would refrain from saying “the Chinese virus,” but used the term again Thursday evening in briefing reporters.

“I talk about the Chinese virus and I mean it,” the president said. “That’s where it came from.”

The Chinese government itself had identified a new, unknown illness spreading in Wuhan. Physicians and scientists such as Dr. Li Wenliang tried to warn of the new pathogen they thought had emerged from a Wuhan seafood market.

Government censors punished and silenced Li and others. Li later died from COVID-19.

Meanwhile, the ominously named Cyberspace Administration of China ensured that the nation’s social media platforms started to censor any references to the new coronavirus as well as critiques of the government’s handling of the spreading epidemic.

According to a report by CitizenLab, a cyber-research group associated with the University of Toronto, Chinese social media platforms such as YY and WeChat began censoring content as early as December.

Social media companies are subject to strict laws requiring them to censor content that “undermines social stability” or is critical of the central government.

So YY added 45 keyphrases to an internal blacklist, including “Wuhan unknown pneumonia” and “Wuhan seafood market” on Dec. 31, a day after eight persons, including Li, raised the alarm about the virus in a WeChat group.

The U.S. government must act forcefully to expose the Chinese deception, propaganda, and suppression of the truth about this deadly virus that China’s government has inflicted on the world.

The Chinese are hard at work. In addition to fighting COVID-19 and bolstering the U.S. economy, we must engage in this information war.

Helle C. Dale is the Heritage Foundation's senior fellow in public diplomacy. Her work focuses on the U.S. government’s institutions and programs for strategic outreach to the public of foreign countries, as well as more traditional diplomacy. Read her research.

Her article first appeared at The Daily Signal on March 26.

Image: A man wearing a face masks walks on the street following an outbreak of the coronavirus disease (COVID-19), in Beijing, China March 27, 2020. REUTERS/Carlos Garcia Rawlins