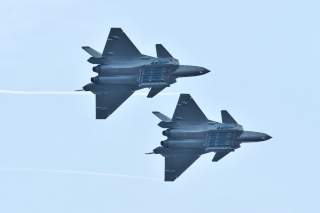 The Chinese military has decided to develop the air force’s J-20 stealth fighter into a sea-based variant to fly from the navy’s growing fleet of aircraft carriers.

If the selection of the J-20 is confirmed it will mark the end of a lengthy debate between its supporters and advocates of the FC-31 as to which would make a better carrier-based fighter.

“Both the J-20 and FC-31 have their advantages. The size of the J-20 is similar to the J-15 since both are powerful heavy fighters,” Song Zhongping, a military commentator for Hong Kong-based Phoenix Television, said.

The J-20, which weighs 21 tons without fuel and weapons and up to 40 tons with them, likely will require a catapult for launch.

The U.S. Navy's carriers use steam catapults to launch aircraft weighing as much as 50 tons. The Chinese navy could commission its first catapult-equipped aircraft carrier in 2022, according to the May 2019 edition of the U.S. Defense Department’s annual report on Chinese military developments.