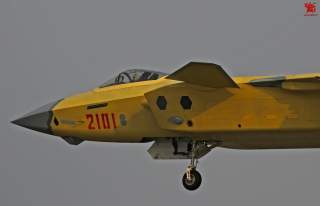 According to Scramble Magazine Facebook Page, the local Su-30MKKs are now being replaced with the “Mighty Dragon”. The serial batch to look for will be in the 62x0x range.

After its first flight in 2011, with the CAC factory (Chengdu Aircraft Corporation, nowadays part of the Chengdu Aircraft Industry Group) at Chengdu, flight envelope expansion tests were performed by CFTE (China Flight Test Establishment) at Xi’an Yanliang, followed by weapons integration testing at Dingxin, by which time the aircraft were slightly modified. Next, Initial Operations Concepts trials were performed by the Flight Test & Training Base at Cangzhou, which also included flight demonstrations during e.g. Zhuhai airshow.

Reports coming from Chengdu suggest we can expect news on further developments with the J-20 soon.

The Chengdu J-20 Mighty Dragon is a single-seat, twinjet, all-weather, fifth-generation fighter aircraft developed by China’s Chengdu Aerospace Corporation for the People’s Liberation Army Air Force (PLAAF). The J-20 is designed as a fighter with precision strike capability; it descends from the J-XX program of the 1990s.

The J-20 made its maiden flight on Jan. 11, 2011, and was officially revealed at the 2016 China International Aviation & Aerospace Exhibition. The aircraft was in military service by March 2017, with the aircraft officially entering combat training phase in September 2017.