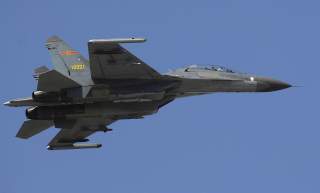 Key point: The Chinese military "recognizes that a gap exists between the skills of its pilots and those in 'the air forces of powerful nations."

David Axe serves as Defense Editor of the National Interest. He is the author of the graphic novels  War Fix, War Is Boring and Machete Squad. This article appeared last month.