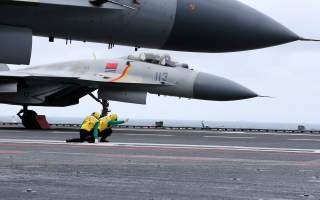 The J-15—which is an unlicensed Chinese development based on a T-10K-3 prototype of the Russian Su-33 Flanker-D—has proven to be a disappointment in service with the People’s Liberation Army Navy (PLAN). The navalized Chinese Flanker derivative has suffered a number of high-profile crashes due to technical issues with the aircraft’s engines and flight control system.

At the end of the day, the Chinese reverse engineered the J-15 design from an incomplete prototype of the Sukhoi Su-33 that it acquired from Ukraine. While Chinese engineers might have gained considerable insight into the Flanker design from the T-10K-3 and other Su-27 derivatives in Beijing’s possession, because they did not develop the jet or its systems, they do not fully understand the airframe due to some of the traditional limitations inherent to reverse engineering. These gaps in knowledge probably led to the some of the problems the Chinese are now encountering with the J-15 design.