China's Chernobyl? Communism Is the Reason Coronavirus Is So Dangerous 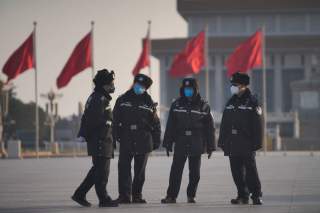 There have been nearly 2,800 confirmed cases of coronavirus so far. At least 80 people have died, and the disease has popped up in a dozen countries. China’s Hubei province, where the virus originated, is on lockdown; its cities resemble a post-apocalyptic landscape absent cars, pedestrians, and vendors. Like any deadly disease, coronavirus is a tragedy; however, Chinese communism is making this one far worse.

The coronavirus is naturally difficult to stop. Unlike SARS, an outbreak of which left 800 dead in 2003, coronavirus is apparently contagious before people show symptoms. It has an incubation period of up to two weeks, during which people are contagious but won’t know they’re sick. One doctor who authored a study on coronavirus last week described it as “asymptomatic walking pneumonia.” Emergency services are overwhelmed and Chinese hospitals lack sufficient space to accommodate patients, putting even those who are healthy at risk of contracting the disease. Neil Ferguson, a public health expert at the London’s Imperial College, estimated the actual number of infected to be 100,000.

Yet other parts of the epidemic are of the Chinese government’s own making. As we recently wrotein the Wall Street Journal, wartime censorship in the US and allied countries, one hundred years ago, played a major role in turning the misnamed “Spanish flu” into a worldwide pandemic that left an estimated 50 million dead around the world, including 700,000 in the US. If the coronavirus turns into a catastrophe suppression of the early bad news as part of the Communist regime’s efforts to control information will deserve much of the blame. The one-party state and cult of personality around Xi Jinping make the government, and Xi personally, not only responsible for all successes, but all failures as well. Coronavirus risks displaying government incompetence and dishonesty, and thus incentivizes the regime to cover up the scale of the crisis. With its people and the media already muzzled, there is no counterweight to hold the government to account.

Even now, the authorities seem to be actively suppressing social media which suggest the true scale of the crisis is far worse than the government has indicated. In one quickly deleted video posted to Chinese social media site Weibo, a woman walks through a hospital and shows exposed dead bodies lying along the aisles. In another, a young man who says he is in Wuhan and fears getting caught by police as he tries “to get the truth out” describes chaos at hospitals, busy tones when calling the emergency numbers, and patients being “left for dead.” Perhaps that too will be deleted soon.

Chinese policies to stop coronavirus’ spread may already be too little and too late. In a kind of self‑parody, the governor of Hubei where Wuhan is located misspoke twice about the province’s annual mask production capacity. First saying it was 10.8 billion, then correcting himself to say 1.8 billion. Finally admitting it was only 1.08 million, or less than 10 percent of Wuhan’s population. He’s become a symbol of incompetence and the public is furious.

The fact that Wuhan is home to China’s advanced virus research laboratory known as the Wuhan Institute of Virology, which does some classified work for the Chinese military, has predictably generated speculation that the novel Corona virus might have somehow leaked out of that institute.

Were that in fact the case, it would recall the experience of the 1979 anthrax outbreak in Sverdlovsk, in the Soviet Union, when anthrax spores leaked from a Soviet biological weapons facility, killing at least 64 people. Soviet authorities covered up the incident until 1992 when Boris Yeltsin, as President of Russia and former Party boss of Sverdlovsk, acknowledged the truth about the outbreak. A team of Western scientists, headed by Harvard’s Matthew Meselson, who in 1986 had initially endorsed the official line, were then allowed to interview affected families and health workers. They concluded that the dispersal of the anthrax spores resulted from the failure to replacea filter on an exhaust at the facility. Had the wind blown in a different direction, hundreds of thousands could have been exposed to the pathogen. In such circumstances, the reluctance of authorities to acknowledge the truth become even stronger, but so does the need for transparency to deal with the outbreak.

As recently as two days before the scale of the outbreak became public, the city of Wuhan gathered 40,000 families for the world’s largest potluck. A ban on travel from Wuhan went into effect only last Thursday after some five million people had already left the city. Authorities have since expanded the travel ban to an area encompassing 56 million people; however, this came after hundreds of millions of people traveled across the country for this week’s Lunar New Year celebrations. Over the weekend, China temporarily banned the wild animal trade, after coronavirus crossed from animals to humans.

This article by Paul Wolfowitz first appeared at AEI.