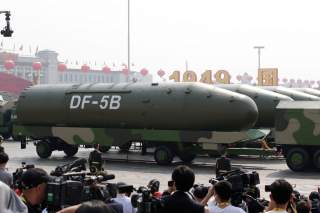 Key point: America couldn't stay in the INF Treaty while China built lots of missiles that Washington wasn't allowed to have.

Paramount leader Xi Jinping just presided over the largest, most impressive military parade in the history of the world. The occasion: to commemorate the seventieth anniversary of the People’s Republic of China (PRC), which just exceeded the Soviet Union’s lifespan by one year. The parade indeed showcased numerous military technological accomplishments far exceeding previous Soviet efforts. Showing ironclad resolve, Xi emphasized that China “continue to strive forward [with] the complete unification of our country.”

The bottom line: Missiles, missiles, and more missiles. For coercion, coercion, and coercion. Paraded, ironically, down Beijing’s “Avenue of Eternal Peace” (长安大街). Tradition holds that all systems displayed are already deployed for service in the People’s Liberation Army (PLA). For specialists, this just underscores a long-running PRC effort at missile-centric deterrence. For other observers, the sheer scope and scale of hardware displayed—much of it conveniently labeled with large English letters—may well offer a revelation concerning Beijing’s military might and assertiveness.

In true PRC fashion, for this national-level effort nothing was left to chance. China’s Military Parade (中国阅兵) was patriotically narrated in confident detail on China Central Television. Since 2015, preparations had been underway at facilities designed to mimic the Beijing setting. And the entire pageant was wrapped in redolent rhetoric along the lines of “strong country dream, strong military dream” (强国梦, 强军梦). But this was not a case of style and symbolism over substance: the sheer array of real strategic systems on display was simply staggering, and shows real strength.

Arguably today’s biggest single statement for foreign consumption—literally backstopping the entire parade—was China’s debut of the DF-41 solid-fueled road-mobile intercontinental ballistic missile (ICBM). China’s newest, most powerful, and arguably most advanced nuclear weapons system, the DF-41 has clearly been designed and deployed with deterring the United States in mind. It is described as “a cornerstone of China’s nuclear [weapons] power” (我国核力量重要支撑). This is part of Beijing’s comprehensive, missile-centric effort at nuclear and conventional deterrence.

Other missiles displayed for the first time ever in the parade marked China at the cutting-edge of frontier military technologies. These included the little-known DF-100/CJ-100 “supersonic cruise missile,” described as “the newest in the Changjian series,” and the prominently-displayed DF-17 conventional missile with its sleek hypersonic glide vehicle.

Other ballistic missiles on parade included the well-known DF-5B ICBM whose multiple independently targetable reentry vehicles (MIRVs) greatly complicate defenses against it, the DF-31AG mobile ICBM with its “high survivability,” the JL-2 submarine-launched ballistic missile, and the DF-26 nuclear/conventional intermediate-range ballistic missile capable of striking land and sea targets. The HQ surface-to-air missile series was well-represented, with -6A, -9B, -12A, -16, and -22 variants. Other cruise missiles included the YJ-12B and YJ-18 supersonic anti-ship weapons.

Marching in exact, increasingly joint formations were all major types of Chinese armed forces personnel. Notably, with Xi having stated that the central government would “maintain long-term prosperity and stability of Hong Kong and Macau,” the People’s Armed Police was showcased as “an important apparatus for social stability” (社会稳定的重要装备), the Strategic Support Force made its lockstep debut, and PLA Rocket Force personnel were hailed for their strength and importance.

But the biggest single theme was the sheer number and variety of conventional missiles.

So what does this mean for U.S. policy? Most importantly, Beijing’s massive missile buildup underscores a major reason why the Trump Administration was right to withdraw from the 1987 Intermediate-Range Nuclear Forces (INF) Treaty: to free Washington to deter aggression with missiles of its own.

It’s common sense that an agreement can’t work if only one party honors it. Unfortunately, that’s precisely what unraveled INF. In formally withdrawing on August 2, 2019, Washington bluntly acknowledged that this increasingly antiquated accord had no future. First, the treaty’s sole cosignatory, Moscow, had been flouting INF rules for years. President Obama himself considered terminating it for precisely that reason. Second, this unilateral American constraint had become particularly costly: during the INF’s 32-year lifespan China developed the world’s foremost conventional missile force precisely within ranges that INF prohibited (ground-launched nuclear and conventional cruise and ballistic missiles of 500-5,500 km). Much of which was on prominent display today.

Yet Beijing wouldn’t join INF—the one way the treaty might have been rejuvenated. It still won’t. And China increasingly threatens the U.S. and its allies and partners, as well regional peace and norms, with a robust missile-centric arsenal. It’s not the INF’s demise itself that should be lamented, therefore, but rather the Russo-Chinese actions that precipitated it. Exiting INF is no panacea, but it opens much-needed possibilities for resetting the military balance and calculus in the Asia-Pacific. There, Chinese missiles pose a significant threat to U.S. and regional security. Freed from the constraints of the INF, the U.S. should take the opportunity to develop and deploy its own missiles to counter that threat.

Beijing’s own official statements indicate that it will not accede to any other substantive arms control agreements for the foreseeable future. On the contrary, earlier this summer China fired six anti-ship ballistic missiles (ASBMs) into the South China Sea. Ironically, by forcing the withdrawal and destruction of U.S. Pershing II active radar-homing ballistic missiles at the end of the 1980s, INF may have provided China key technologies facilitating the development of its ASBMs—potent systems the United States and Russia could have produced themselves long before absent INF restrictions. At a minimum, PRC researchers studied Pershing II missiles extremely closely.

The several dozen “carrier killer” weapons China fields today are but a fraction of its potent arsenal. China “controls the largest and most diverse missile force in the world, with an inventory of more than 2,000 ballistic and cruise missiles,” Admiral Harry Harris, then commander of the U.S. Pacific Command, testified in 2017. “Approximately, 95% of [China’s] missiles would violate the INF if China was a signatory.” Put another way, up to 2,650 PRC missiles wouldn’t comply. Importantly, Beijing appears to believe that a nuclear arsenal far smaller than Russia’s or America’s is sufficient for deterrence. Chinese strategists view conventionally-armed missiles as far more acceptable, and hence far more useful. Thus, China’s conventional missiles exceed its nuclear missiles by at least a 7:1 ratio. That happens to exploit an enormous loophole in even general arms control discussions, let alone actual enforceable restrictions.

All too often, Beijing’s official statements and arms control discourse more broadly focus exclusively on nuclear weapons—which of course merit attention—to the exclusion of addressing the high-end conventional weapons systems that China has deployed on an industrial scale. This missile myopia must end now: Aside from increasingly disruptive cyber technologies, China’s missile-centric military buildup may be the single biggest factor eroding American power and influence in Asia. If not countered effectively, it could restructure the region away from the peace and prosperity-promoting alliances and rules that Washington has spent tremendous blood and treasure to cultivate over the last eight decades.

For years, China has made meteoric military progress by persistently pursuing technologies that potentially place opponents on the wrong end of physics—in a capabilities competition favoring China designed to become extremely expensive and risky for the United States to even wage, let alone win. And that’s precisely the point: Beijing wants to win without fighting and compel Washington and its regional allies to yield to its self-proclaimed “core interests” by intimidating with a fait accompli of deterrent military might—just like the display it paraded so prominently today.

The ballistic missile has been the cornerstone of Beijing’s effort. Whereas aerodynamically-guided cruise missiles must operate within aircraft-like altitudes, longer-range ballistic missiles maximize speed by flying above the atmosphere mid-course. Ballistic missiles of all ranges close on their targets at multiple times the speed of sound, leaving little time and few opportunities to intercept them. For China—a technologically capable power that has prioritized their development since the late 1950s—ballistic missiles can be developed, deployed, and employed far more cheaply and effectively than they can be defended against.

Moreover, although China is finally dipping its toe in the water regarding sea-based nuclear weapons deployment, the vast majority of its missiles remain land-based. This exploits two formidable factors. First, as the Iraq War ‘Scud Hunt’ demonstrated, even in exposed desert it is extremely difficult to find mobile missiles in real time and neutralize them prior to their launch. This is true all the more for China’s full range of concealing terrains, extensive underground facilities that provide protection for the missile force, ability to deploy road-mobile missiles, and potential to communicate securely by having launch brigades access secure fiber optic networks at pre-designated locations. Second, large INF-range missiles are substantially easier and cheaper to develop and operate in land-based form than in equivalent variants for submarines, surface ships, and aircraft. Third, launching missiles from deep in the interior of a large nation like China makes certain types of intercept (e.g., boost-phase) impossible.