China's Missiles Could be a New 21st Century Kamikaze Weapon 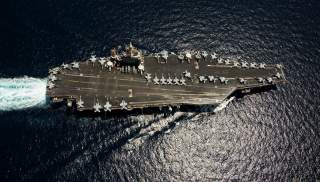 Key Point: Should conflict erupt between America and China, or should U.S. vessels face advanced antiship missiles in a flashpoint like the Persian Gulf, I suspect the most profound impact of these weapons will be psychological. Whether these missiles sink ships, or whether U.S. defenses shoot them down, I think what will dominate the headlines and public opinion will be stories of missiles streaking toward ships at incredible speeds. Missiles that can't be driven off or deterred—only killed.

Like an urban dweller fearful of muggers around every corner, the U.S. Navy is now contemplating a grim future where no neighborhood is safe. Whether it operates in the South China Sea, the Baltic or the Persian Gulf, the Navy has to reckon on salvos of deadly antiship missiles. When even an organization like Hezbollah can get its hands on ship-killer missiles, it's a signal that world's oceans are a dangerous place.

But decades ago, the U.S. Navy faced a similar threat. By late 1944, the U.S. Navy was the mightiest fleet on Earth. The Nazi U-boat threat had been mostly vanquished, the Japanese surface fleet decimated, and Japanese airpower a shadow of its former glory.

Yet four months later, U.S. sailors were terrified. Japan had unleashed the kamikazes, the "divine wind" of suicide aircraft that over the next ten months would sink more than fifty ships and damage hundreds more. The problem wasn't lack of courage, not for men who had survived Midway and Guadalcanal. It was the terror of facing an enemy so determined to kill you that he would deliberately sacrifice his life in the process.

When most people think of a twenty-first-century successor to the kamikaze, they probably think of a suicide bomber. Instead of a Japanese pilot crashing his Zero fighter into an American aircraft carrier, it's an Al Qaeda terrorist plunging an airliner into the Pentagon on 9/11, or an ISIS fighter detonating his suicide vest in a crowded market.

But the goal of a suicide bomber is strictly terror True, ISIS has employed suicide bombers on the battlefield as a sort of human artillery to blast holes in enemy defenses before an assault. Yet no one expects to physically destroy an enemy army by using human bombs. They are primarily psychological weapons aimed at breaking the will of the enemy.

Kamikazes also created terror. "I know something of the fear and panic that is generated when Kamikazes approached our Navy Task Force," recalls a World War II Navy airman. "I saw our ships' gunners so jittery by the presence of Kamikazes that they fired on our own planes returning from strikes on Japanese targets."

However, whereas a suicide bomber is strictly an instrument of terror, the kamikaze was a tactical weapon for which terror was a byproduct, much as the Nazi Stuka dive bomber demoralized Allied soldiers with sirens embedded in the aircraft. Kamikazes were employed as expendable munitions, like a bomb or a torpedo, except with a human guidance system. Even a kamikaze damaged by U.S. anti-aircraft fire could still complete its mission by diving into an American ship. If they could terrify the Americans into making peace, so much the better. Regardless, every U.S. ship sunk was one less ship to continue the relentless U.S. drive across the Pacific.

In fact, there was a horrifying but undeniable military logic to kamikazes. So far had the Imperial air arm declined in the quality of its pilots and aircraft, that at the Battle of the Philippine Sea in June 1944 (otherwise known as the "Marianas Turkey Shoot"), Japan lost about 500 of the 750 carrier- and land-based aircraft it had committed to battle. As one Japanese officer said, the odds of regular pilots surviving combat had become so low that they might as well be launched as kamikazes. And the suicide aircraft took their toll: between October 1944 and August 1945, they sank more than fifty Allied ships and damaged hundreds more.

Today's counterpart to the kamikaze isn't the suicide bomber, but the antiship missile, such as Russian-made hypersonic weapons streaking in at five times the speed of sound, or Chinese ballistic missiles designed to sink U.S. aircraft carriers.

What missiles and kamikazes share is a terrifying and inhuman relentlessness. Put up enough antiaircraft fire, and you might scare a human pilot into breaking off his attack. But you can't scare off a kamikaze pilot determined—or resigned—to die, nor can you frighten off a missile. The only way to stop them is to blow them up, damage them so badly they crash into the ocean, or hope to God that they miss your ship.

We already saw a glimpse of the psychological impact of antiship missiles in the Falklands War, where a handful of Argentine Exocets both put the "fear of God" in the British fleet and captured the public's imagination with the spectacle of British destroyers set ablaze from a single missile hit.

Should conflict erupt between America and China, or should U.S. vessels face advanced antiship missiles in a flashpoint like the Persian Gulf, I suspect the most profound impact of these weapons will be psychological. Whether these missiles sink ships, or whether U.S. defenses shoot them down, I think what will dominate the headlines and public opinion will be stories of missiles streaking toward ships at incredible speeds. Missiles that can't be driven off or deterred—only killed.