China's Naval Base in Africa Is Getting Bigger. Is a Network of Bases Next? 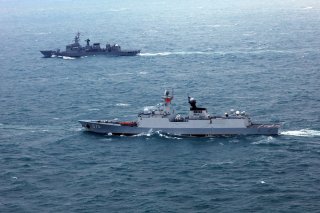 One major advantage the United States Navy has over its rivals is the fact that it maintains facilities and bases around the globe, including in such countries as Bahrain, Kuwait and Cuba. However, it is the base in the African nation of Djibouti where things could become "interesting" very quickly. The country's strategic location on the "Horn of Africa" at the Bab-el-Mandeb Strait, which separates the Gulf of Aden from the Red Sea, is crucial to protecting the approaches to the Suez Canal.

The African nation is unique in that it hosts not only the United States Naval Expeditionary Base next to the Djibouti-Ambouli International Airport, but is also home to other foreign military bases including a French airbase, an Italian support base and the Japan Self-Defense Force Base Djibouti – the first JSDF full-scale, long term overseas base. But most notably it is also the location of the Chinese People's Liberation Army's Navy's (PLAN) first overseas military base, which was built at a cost of $590 million in 2017, and is located just a few miles from the Navy's Camp Lemonnier as well as the main port at Djibouti, which U.S. Navy and European warships also visit.

While Djibouti is one of Africa's smallest countries, it has become an important "strategic partner" to Beijing, and has been seen as a gateway for China to the African continent. However, China has largely avoided describing this project as a "military base" and rather has focused on terms such as "support facilities" or "logistical facilities." So far China's military involvement in the Horn of Africa has mainly consisted of anti-piracy missions, but it is believed it could support other key missions including intelligence collection, non-combat evacuation operations, peacekeeping operations support and counterterrorism.

The facility is also expanding. H I Sutton, writing for Forbes, reported that the recent satellite images of the post indicate that it is transforming to a fortified support base, and this has included the completion of a pier and possibly the start of a new quay or second large pier – which could significantly increase the capacity of the facility.

The efforts in the Horn of Africa could all be seen as a crucial part of China's bold "One Belt, One Road" global infrastructure program, which calls for a string of military facilities that could include port facilities in far off locations as the Maldives and Tanzania.

David Brewster, a senior research fellow with the National Security College at the Australian National University, told Bloomberg in 2018 that the base in "Djibouti is only the first step in what is likely to become a network of Chinese bases across the Indian Ocean."

It is yet to be seen whether the novel coronavirus, which originated in Wuhan, China will slow those efforts – but it does appear China continues to make serious strides to expands its presence across the Indian Ocean. Last month Chinese PLAN forces were seen conducting exercises near Karachi, Pakistan, while the PLAN Marines Corps continues to expand to a multidimensional force that can operate beyond oceans fight in all terrains around the world and serve as a fast-reacting force to protection Beijing's quickly growing overseas assets.