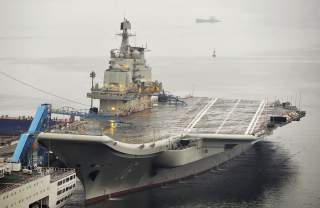 The People’s Liberation Army Navy operates or is building three flattops. Writing at The Diplomat, Rick Joe provided an update on each.

CV-16 Liaoning is a former Ukrainian vessel that China rebuilt and commissioned in 2011. The 60,000-ton-displacement vessel launches its J-15 fighters by way of a bow ramp.

“CV-16 returned to Dalian shipyard in mid 2018 for maintenance and refit, where the island structure was altered and presumably additional upgrades were made internally,” Joe wrote.

After its refit, Liaoning participated in the PLAN 70th anniversary naval review [in April 2019].

And more recently, Liaoning and an escort force including a 901 comprehensive resupply ship passed through the first island chain into the western Pacific, presumably for a training deployment.

It will likely be another few years yet until Liaoning will have to return to a shipyard for a major overhaul.

The ship was launched in April 2017, and began sea trials one year later in April 2018. Recent pictures of 002 from May this year have revealed tire marks on the landing strip, indicating that aviation trials with fixed-wing aircraft (J-15s) have begun. Carrier 002 is expected to be commissioned by the end of 2019.

002 is a ski jump-equipped carrier derived from the design of CV-16 Liaoning. The ship enjoys various modifications from Liaoning, such as a significantly redesigned island and overall smaller island footprint, as well as redesigned, larger weapons elevators.

Similar to Liaoning, 002 is only capable of accommodating ski jump-launched J-15 fighters and helicopters at this time. It is unknown if future catapult compatible fighters will be designed to operate from ski jump carriers like 002 and Liaoning.

Carrier 002 can be thought of as another “bridging carrier” toward the PLAN’s ultimate and preferred carrier configuration of fielding large catapult-equipped vessels instead.

The Type 003 carrier under construction in Shanghai could be the first truly modern carrier in PLAN service. Its catapults could allow it to embark a wide array of large, sophisticated aircraft including drones, radar planes and new fighters.

“The first pictures of 003’s modules made their way onto the internet in June 2018,” Joe wrote.

Since then, more pictures have emerged showing additional modules emerging and undergoing assembly. Of note, a satellite photo contracted by the Center for Strategic and International Studies provided a useful estimate for the beam of one of the hull modules, giving it at [around] 41 meters, consistent with what would be expected for a carrier of this size …

The construction of 003 had been rumored to be somewhat unique, whereby the ship’s modules would first be assembled at a staging area into “super blocks” of very large and complete hull sections.

Those “super blocks” would then be transported by water to a drydock elsewhere in the shipyard for final assembly of the super blocks and assembly of additional flight deck sponsons and topside modules such as the island. Finally, the ship would be launched from drydock for fitting out.

After drydock assembly is complete, 003 is likely to be launched overall in 2021. Assuming it takes two years of fitting out and sea trials, the current estimated commissioning of the carrier 003 is the year 2023.

China's first two flattops probably won’t venture too far from home, the U.S. Defense Intelligence Agency predicted. "The primary purpose of this first domestic aircraft carrier will be to serve a regional defense mis­sion," the intelligence agency claimed in a January 2019 report. "Beijing probably also will use the carrier to project power throughout the South China Sea and possibly into the Indian Ocean."

But that could change as China’s carrier fleet expands. The Chinese navy could possess as many as six aircraft carriers by the mid-2030s, experts told state media. As many as four could have catapults.