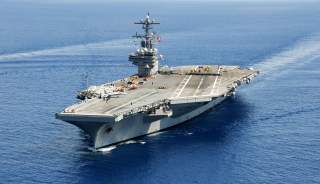 The Chinese navy could commission its first catapult-equipped aircraft carrier in 2022, according to the May 2019 edition of the U.S. Defense Department’s annual report on Chinese military developments.

China’s first two flattop Liaoning, a Cold War-vintage ex-Ukrainian ship that commissioned in 2012, lack catapults and instead launches her planes via a ramp on her bow.

“China’s first domestically built aircraft carrier was launched in 2017, completed multiple sea trials during 2018 and will likely join the fleet by the end of 2019. The new carrier is a modified version of the Liaoning but is similarly limited in its capabilities due to its lack of a catapult launch system and a smaller flight deck than the deck on U.S. carriers.”

Moreover, the J-15 must operate with very little support from other aircraft types. "The ski-jump design also means [Liaoning] cannot operate large, specialized support aircraft, such as an [airborne early warning] aircraft," according to the DIA.

Which is not to say Liaoning and her sister ship aren't useful. "Though Liaoning has substantially less capability than a U.S. Navy carrier, it provides extended air-defense coverage for at-sea task groups and is being used to develop further China’s carrier pilots, deck crews and tactics," the Pentagon noted in the 2018 edition of its annual report on the Chinese military.

Beijing’s third carrier likely will be the first with catapults, according to the Pentagon’s May 2019 report.

“China began construction of its second domestically built aircraft carrier in 2018, which will likely be larger and fitted with a catapult launch system. This design will enable it to support additional fighter aircraft, fixed-wing early-warning aircraft, and more rapid flight operations. China’s second domestically built carrier is projected to be operational by 2022.”

China's first three flattops probably won’t venture too far from home, the DIA predicted. "The primary purpose of this first domestic aircraft carrier will be to serve a regional defense mis­sion," the intelligence agency claimed. "Beijing probably also will use the carrier to project power throughout the South China Sea and possibly into the Indian Ocean."

But that could change as China’s carrier fleet expands. The Chinese navy could possess as many as six aircraft carriers by the mid-2030s, experts told state media. As many as four could have catapults.