China's New Missile Submarines Could Nuke America (Or Not) 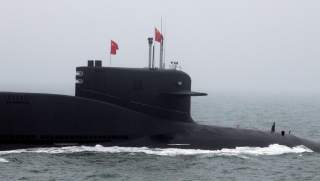 China has speeded up the development of a new, longer-range submarine-launched ballistic missile that in theory could deliver a nuclear payload to the mainland United States.

But experts caution against believing some of the loftier claims regarding the new SLBM’s capabilities.

Two independent sources told the Hong Kong South China Morning Post that the Chinese navy in December 2019 tested the JL-3 SLBM, which the navy intends to fit to its still-in-development Type 096 ballistic-missile submarine, or boomer.

The JL-3 launched from an older Type 094 boomer in Bohai Bay in the Yellow Sea, South China Morning Post reported. The test warhead landed in the northwest Gobi Desert in Xinjiang.

The Chinese navy previously tested the JL-3 back in November 2018, The Diplomat reported.

"Modernization of China’s submarine force remains a high priority for the PLAN," the U.S. Defense Department explained in its 2018 report on Chinese military capabilities.

The 2018 test, which also started in Bohai Bay, focused on the missile's "cold-launch" capability. In other words, its ability to boost from the submerged launching vessel and out of the water before igniting its booster. The 2019 test involved a longer-range flight for the potentially 50-ton rocket.

The single Type 092 boat that carried the JL-1 never completed a front-line deployment after entering service in 1987. “It was reportedly too noisy and might have had other safety and reliability issues,” Tong Zhao, a fellow in the Nuclear Policy Program at the Carnegie Endowment for International Peace, based at the Carnegie–Tsinghua Center for Global Policy in Beijing, explained in a 2018 study

The Type 094s, by contrast, have been a relative success in service. In 2015, the U.S. Office of Naval Intelligence described the type's imminent first front-line deployment "perhaps the most anticipated development in China’s submarine force."

Each armed with a dozen JL-2s, Type 094s began to enter service around 2006. A Type 094 apparently conducted China's first undersea deterrence patrol in 2015. “This represents the start of a new era for China’s sea-based nuclear forces," Tong wrote.

To target California, a Type 094 might have to sail past Japan. Ideally for Beijing, its boomers would be able to remain close to mainland China and under the protection of the Chinese fleet while still credibly threatening the United States.

The JL-3 could help the Chinese navy to fulfill this ambition once it, and the Type 096 submarines that will carry it, enter service. Each Type 096 will carry 24 JL-3s. The Pentagon's China report projected that construction of the first new boomer would begin in the early 2020s.

But work on the new submarine reportedly has slowed. Where previously the Chinese navy pegged development of the JL-3 to the parallel work on the Type 096, authorities reportedly recently made the decision to separate the two systems’ developments. That way the JL-3 can be ready for deployment by the time the first Type 096 leaves the shipyard.

However, it still could take five years to integrate the JL-3 and the Type 096, potentially pushing back the first front-line patrol of a JL-3-armed Type 096 into the late 2020s or beyond.

It's unclear how many Type 096s Beijing plans to build. "To maintain a continuous peacetime presence, the PLAN would likely require a minimum of five ... SSBNs," ONI reported in 2015.

It's possible that the Chinese Communist Party plans to deploy Type 096s alongside Type 094s, allowing it to expand the boomer fleet beyond the five that the Americans have determined are necessary for a around-the-clock deterrence, and even beyond the eight that Dill claimed were planned.

The U.S. Navy operates 14 Ohio-class boomers. It's building 12 new Columbia-class boats to replace them starting in the 2020s. While China might never deploy a dozen boomers, it could get close to that number.

And once the Type 096s enter service with their JL-3 missiles, the Chinese boats could possess an at-sea nuclear deterrence that, in size and power, is similar to America's own deterrence.

But the JL-3 likely will lag behind the American Trident missile in at least one key capability. Rick Fisher, a China military analyst with the International Assessment and Strategy Center, told The Washington Free Beacon the JL-3 would carry 10 multiple independent reentry-vehicle warheads, or MIRVs, roughly matching the warhead capacity of a Trident.

Fisher probably is wrong, two experts stated. “As for 10 MIRV rumor … a big grain of salt, please,” tweeted Hans Kristensen, a nuclear expert with the Federation of American Scientists.

China clearly is making progress with its new SLBM and the submarine that will carry it. But that doesn’t mean the Chinese fleet is close to exactly equaling the U.S. Navy’s own nuclear capabilities. “There is a big gap for China to catch up in sub technology,” a source told South China Morning Post.