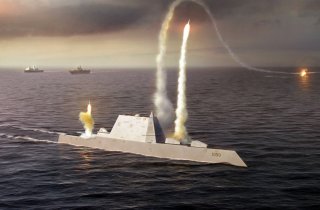 The Chinese Navy may soon operate a forward-deployed, ship-integrated ballistic missile defense system designed to bring new layers of protection from ocean-based threats. A Defense Department report on the People’s Republic of China (PRC) shows that the country plans to deploy a mobile, maritime ballistic missile defense system on board its new Type-055 stealthy destroyer.

Should this come to fruition, the People’s Liberation Army-Navy would take a huge step toward rivaling or challenging the U.S. ship-based Aegis System for ballistic missile defense (BMD).

“The PRC is working to develop BMD systems consisting of exo-atmospheric and endoatmospheric kinetic-energy interceptors,” according to the report, which is titled Military and Security Developments involving the People’s Republic of China. “PRC state media confirmed the PLA’s intent to move ahead with land- and sea-based midcourse missile defense capabilities.”

The U.S. Navy has demonstrated its ability to use the Aegis Radar System to track and destroy the target of an intercontinental ballistic missile (ICBMs) beyond the earth’s atmosphere. It used an advanced SM-3 Block IIA interceptor missile to achieve this goal. U.S. Navy destroyers and cruisers are engineered with advanced variants of the well-known Aegis radar system, which is an integrated system of radars, sensors, fire-control technology and ship-fired interceptors. Placing a BMD system on a ship allows the ship to maneuver and stay in position despite threats. The Aegis Combat System, specifically its new variant, known as the Aegis Baseline 10 radar, enables BMD and air- and cruise-missile defense to operate from a single system. Thus, ships with the latest radar system have the ability to track and destroy enemy ICBMs traveling through space during the “midcourse” phase of their flight toward a target. This feat was previously only possible with the use of land-launched ground-based interceptors. Now, this kind of advanced, long-range impactful missile defense is arriving at sea for the U.S. Navy. It appears this is what China is attempting to match with its new destroyers reportedly being engineered with midcourse missile defense technology.

China’s new Type-055 destroyer looks like a hybrid blend between the Navy’s stealthy Zumwalt-class destroyers and DDG 51 Arleigh Burke-class destroyers. It has concentrated Vertical Launch Systems, a smoother, straighter hull configuration with a reduced amount of radar signature-increasing protruding structures such as guns on the side, deck masts or antennas.  Unlike the nearly completely smoothed over Zumwalt-class deck and hull structure, the Chinese Type-055 destroyer has DDG 51-like protruding antennas on its back half. This is something that could reduce its stealth properties. Regardless, should these Type-055 destroyers will greatly erode any kind of U.S. military superiority at sea if they have Aegis-type BMD.