Before China's Orbital Missile Test, the Soviets Had Their Own ‘Fractional’ Orbital Nukes 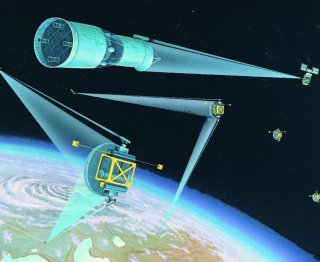 Last weekend, the Financial Times reported that China had tested in August a weapon system that used a Long March 2 rocket to boost a nuclear-capable weapon into low-earth orbit, giving it effectively unlimited range.

From this lofty vantage, the system de-orbited a hypersonic glide vehicle towards a target, which it ended up missing by twenty-four miles. A spokesperson from China’s foreign ministry has since claimed that the test had purely civilian purposes.

But it’s important not to overhype China’s development of orbital weapons. These would amount simply to a new twist on a weapon the Soviet Union deployed in 1969 called the Fractional Orbital Bombardment System (FOBS). But in the end, the Soviets tossed out FOBS, concluding lofting nukes into orbit didn’t offer as great an advantage as one would think.

As the Soviet Union developed its first intercontinental ballistic missiles (ICBMs) in the 1950s, its strategists sought ways to avoid the Mutually Assured Destruction (MAD) dynamic involved in employing the apocalyptic weapons against the United States in a preemptive strike.

That’s because once an ICBM rocketed out from Soviet territory and arced over the North Pole towards North America, it became detectable to Ballistic Missile Early Warning radars, giving the Pentagon ample time to begin launching its own nuclear-armed ICBMs. Moreover, the United States was developing anti-ballistic missile (ABM) missiles, which if ever deployed in number, threatened to shoot down an uncertain percentage of Soviet missiles.

Destroying U.S. missile defense radars and ABM systems might help change that dynamic, but that still required a measure of surprise ICBMs approaching from a predictable arc couldn’t provide. But after the launch of Sputnik, Soviet designers then latched onto the idea of launching weapons all the way into orbit, from whence the weapon could drift like a satellite anywhere around the globe without consuming fuel. Such a missile could approach North America from a southern vector uncovered by existing missile defense radars and ABMs and launch a nuclear payload from overhead.

No less than three design bureaus began developing orbital weapon systems, including the Global Rocket-1A by engineer Sergei Korolev and the UR-200A rocket under Vladimir Chelomey.

But both projects ultimately failed, and it was a variant of the R-36 ICBM developed by Mikhail Yangel in Dnepropetrovsk, Ukraine which literally made it off the ground in 1965.

The 36.2-meter long R-36O, designated the SS-9 Mod 3 ‘Scarp’ or SS-9ORB by NATO, had two-stage liquid-fuel RD-251 and RD-252 rocket boosters. Mounted in the 180-ton missile’s stubby nose was a 1.87-ton payload capsule called the 8F021 OGCh which included a nuclear warhead, the navigation/aiming system, and an RD-854 retrorocket used to maneuver the OGCh and ultimately send it plummeting back to Earth towards its target.

The first half-dozen test launches in December 1965 and 1966 all ended in failure due to flaws in the aiming mechanisms, retrorockets, separation mechanism, and even a spill of explosive fuel on the missile pad. Two missiles even had to be self-destructed due to their second-stage boosters burning too long, allegedly causing debris to spray down on U.S. soil.

But finally, in 1967, the R-36O began test-launching reliably, and it was formally inducted into operational service with a regiment formed August 1969.

But there remained a fly in the ointment: the Treaty on Outer Space signed in 1967 by the Soviet Union and the United States prohibited deploying nuclear weapons into orbit. To obey the letter of the law if not its spirit, the Soviets instead designated the space weapons as capable of only a ‘fractional’ orbit, ie. a decaying one.

Arguably, there remained technical grounds with which the United States could have objected to FOBS, as an object in a decaying orbit might still remain aloft a considerable time. It’s also unclear whether the R-36O was truly incapable of attaining a full orbit or merely pre-programmed to fall.

But Washington early on chose not to complain about FOBS, having already concluded it wasn’t that useful. Still, the U.S. Air Force deployed nuclear-armed Thor anti-satellite missiles until 1975 in part to deter against the FOBS threat.

The Soviet Union stood up just one FOBS regiment in August 1969, with eighteen silos in Kazakhstan divided into three batteries. These finally received nuclear warheads in 1972.

That’s because both U.S. and Soviet advancements soon rid FOBS of much of its utility. For one, the United States deployed two huge new AN/APS-115 PAVE PAWS radars in Massachusetts and California that provided early warning coverage of the southwestern and southeastern arcs, also complemented by new space-based sensors, depriving FOBS of its surprise-attack advantage.

As for negating U.S. strategic missile defense, that proved unnecessary. The United States canceled its Sentinel missile defense program in 1969 and opted to pursue a more limited Safeguard ABM system instead. But in 1972 the Soviet Union and the United States signed the ABM treaty banning deployment of more than two ABM installations. For a few years, the U.S. Air Force maintained just one Safeguard ABM site at Grand Forks Airbase, North Dakota before it was closed by Congressional pressure in 1976.

Meanwhile, FOBS had notable disadvantages compared to an ICBM, including a longer flight time to reach a target, inferior accuracy with only half of shots expected to land within .68 miles of a designated target point, and a lighter nuclear warhead of around 1.5-5 megaton-yield due to the energetic requirements of lofting something into orbit. By comparison, various regular R-36 missiles typically landed within .14-.8 miles of a target and carried one 18 to 25-megaton yield warhead, or 10 smaller separating warheads.

In the end, Moscow too had more effective ways of overwhelming hypothetical defenses such as submarine-launched ballistic missiles and by stuffing ICBMs with numerous smaller independent warheads (MIRVSs).

In theory, then, the United States might detect the FOBS launch vehicle but may have difficulty tracking the maneuverable glider released at standoff distance from its target. Thus such a weapon may assuage Beijing’s anxiety that U.S. missile defense weakens its nuclear deterrence at the same time it is also apparently doubling its nuclear arsenal in size.

However, the Pentagon is working on deploying additional layers of space- and ground-based sensors to help spot and track lower-altitude glide vehicle weapons, FOBS-based or otherwise.  One should also remember that U.S. missile defenses were only billed as protecting against attacks from countries with more limited nuclear arms inventories, ie. North Korea and perhaps one day Iran; not China or Russia.

Claims that China is leaping ahead of the United States are also exaggerated—orbital weapons are a technology the United States, like the Soviet Union, had the means to develop in the 1960s but ultimately dismissed as not worthwhile. It’s also worth noting that the U.S. Space Forces has X-37  spacecraft which though officially not weapons-capable, could hypothetically be modified to deliver space-based nukes if there was ever a point in doing so—which is unlikely given various more effective alternatives.