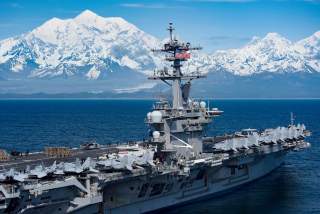 As the media fixates on the U.S. response to the June 13 attacks on commercial shipping in the Gulf of Oman, simmering tensions more than 3,700 miles away in the South China Sea may soon come to a boil. On June 12, the Philippine government released a statement on the sinking of an anchored Philippine fishing boat, the FB Gem-ver 1, after it was rammed by a Chinese vessel in a blatant display of aggression in the South China Sea. Both of these events, in the context of an increasing prevalence of hybrid warfare and gray zone tactics in the maritime domain, constitute potential crises capable of disrupting the global economy and escalating into a military conflict.  Combined, they form an impending maelstrom that would quickly strain U.S. military capacity and threaten its ability to uphold its security agreements with its allies. In this new security environment, the United States needs substantive reflection of its national security priorities juxtaposed to its standing security commitments.

In hybrid warfare, state and nonstate actors offset conventional military capabilities with a range of irregular tactics to achieve military and political objectives. Within the maritime domain, hybrid warfare and gray zone tactics have complicated the security environment where the United States has become accustomed to operating with impunity. Russia’s implementation of cyber warfare during the annexation of Crimea and China’s use of its commercial fishing fleet to implement its cabbage strategy are both examples of hybrid warfare. The escalation and method of conflict are kept within the unconventional arena to prevent provoking a conventional response from another state.

As the United States navigates its response to this practice by its adversaries and competitors, it must be cognizant of the danger of operational overreach when comparing threats with standing defense commitments. The U.S. Department of Defense’s recent Indo-Pacific Strategy is the latest rhetorical extension of the U.S. rebalancing toward Asia, detailing an extensive agenda of partnership and capacity-building in Southeast Asia to contain a rising China. Though this strategy is predicated on an underlying framework of defense alliances backstopped by U.S. military superiority, it fails to adequately address the spectrum of conflict that fall below the threshold of conventional warfare.

Alliance networks are only as strong as the relational fabric and underlying security guarantees that connect them together. If the United States becomes involved in another conflict in the Middle East, resources will inevitably be redirected, and the Southeast Asian maritime domain will once again become relegated to a lesser priority. As U.S. allies and partners are well aware of this, it is understandable that they are wary of how seriously the U.S. takes its security commitments. Although U.S. Secretary of State Michael Pompeo’s clarification on the U.S. willingness to uphold Article IV of the U.S.-Philippine Mutual Defense Treaty may have been meant to be an audible warning to China, the United States has been rather silent in the wake of the sinking of the FB Gem-ver 1.

China, Iran, and Russia do not need to be on the same team to understand that compounding chaos in more places means less overall U.S. capacity. For the United States, the first step to fixing this strategic dilemma is admitting it has one. Materiel and political resources are limited, so the United States must critically examine its willingness, and ability to make good on the security commitments it has bound itself to, the cost of such honoring those commitments, and determining what it can realistically support. Otherwise, the best outcome the United States can hope for is a loosely woven defense network waiting for its credibility to be tested under circumstances that may not be on U.S terms.

Timothy Robbins is a former Marine Corps Officer who has studied international relations and security studies.

Monica Michiko Sato is a graduate student in the Security Studies Program at Georgetown University, where she focuses on Southeast Asian security.