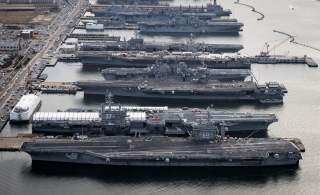 China reportedly is slowing its plan to acquire two aircraft carriers for each of its regional fleets.

Instead of speeding ahead with the development of a six-carrier fleet -- two each for the northern, eastern and southern fleets -- the Chinese navy could stop after acquiring flattop number four.

“Plans for a fifth [carrier] have been put on hold for now, according to military insiders,” the Hong Kong South China Morning Post reported. “They said that technical challenges and high costs had put the brakes on the program.”

The possible pause in carrier-production could cement the yawning capability gap between the U.S. and Chinese fleets.

The Chinese defense ministry declined during a November 2018 press conference to specify how many carriers it ultimately planned to acquire.

In 2019, each fleet possesses between 20 and 30 major surface warships, at least a dozen submarines and a handful of amphibious vessels. Just one, the Northern Theater Navy headquartered in Qingdao, operates an aircraft carrier -- Liaoning, China's refurbished, former Ukrainian flattop, which commissioned in 2012.

The second carrier Shandong, a slightly-improved copy of Liaoning and China’s first home-built flattop in late 2019 is completing sea trials. Carrier number three, a bigger vessel than Liaoning and Shandong, is under construction in Shanghai. Flattop four presumably would be similar in design to number three.

Liaoning and Shandong both displace around 55,000 tons of water. Their powerplants are non-nuclear and, for launching planes, they feature ramps rather than American-style catapults.

The ramp layout probably limits aircraft to a maximum launch weight of 30 tons, a former Chinese navy source revealed. At that weight, a J-15 carrier fighter cannot carry a full load of fuel and weapons, limiting them to brief fights over short distances.

The third and fourth carriers reportedly will have catapults, allowing them to launch heavier planes including fully-armed fighters and radar-early-warning planes. Beijing’s long-term ambition to develop nuclear-powered flattops are on hold, South China Morning Post explained.

“The size of America's lead in annual military spending obscures just how much this difference has accumulated over the decades,” MIT Technology Review continued.

It is a difference not in the number of personnel, but in tanks, ships, airplanes, helicopters, satellites and other military hardware, and in training and systems that enable all these machines and people to effectively work together.

Years of enormous military budgets have bought the U.S. the ability to surveil the globe and project power. As its long, inconclusive engagement in Afghanistan proves, this doesn’t necessarily mean America will always prevail. But it has a unique expeditionary ability. Refueling aircraft and amphibious assault ships might not sound like the bleeding technological edge, but they are of crucial military importance.

“More than any other single technology, aircraft carriers enable the American military to project force almost anywhere in the world,” the MIT publication concluded. In that important measure of military might, China is far behind the United States -- and might never catch up.