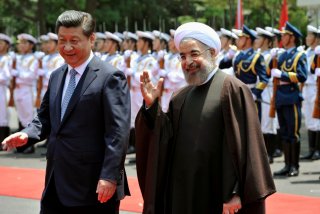 A prospective twenty-five-year agreement between Communist China and the Islamic Republic of Iran has become immensely controversial in Iran, with many ordinary Iranians viewing it as a sell-out of Iran’s sovereignty. To be sure, Tehran and Beijing have yet to formally sign the deal, and the leak of a draft text to Western media likely represents a trial balloon to gauge public reaction. Still, officials such as President Hassan Rouhani and Foreign Minister Mohammad Javad Zarif have described the treaty as a major win for a cash strapped and isolated regime, depicting Beijing as a valuable strategic partner for Tehran.

Yet from what we know, the treaty is not a win for the Islamic Republic. Rather, the regime is merely trying to demonstrate that it is doing something to resolve Iran’s economic crisis.

The details of the agreement between China and Iran remain murky. According to some reports, China will invest heavily in key industries in return for access to Iran’s abundant energy and mineral resources. Yet several rumors about the pact have enraged a population deeply resentful of the regime. In particular, reports of the regime “renting” Iranian islands such as Kish to Beijing have sparked major criticism on social media and Persian language television broadcasts outside of the country. The Persian hashtag “the selling of Iran is forbidden” is currently trending on Twitter.

Washington should be wary of China’s attempts to gain a possible military foothold in Iran. But the popular backlash against the treaty also provides the U.S. a major opportunity to undermine the regime and boost America’s popularity among the Iranian public.

Communist China is widely resented within Iran’s deeply nationalistic society. Iranians are mindful of historic attempts by European powers and Russia to dominate their country. China’s latest reported attempts to gain control over Iranian industry and natural wealth have thus struck a major nerve in the Iranian psyche.

But resentment of China is nothing new. Iranian pro-democracy activists blame Beijing for helping the regime repress the 2009 Green Revolution by providing surveillance technology and anti-riot equipment.

Iranians also blame China for the disastrous Covid-19 pandemic in their country. Reports suggest that the pandemic spread directly to Iran from China through Iran’s Mahan Airlines, a company controlled by Iran’s Islamic Revolutionary Guards Corps. Likewise, Chinese religious scholars in the holy city of Qom may have carried the virus to Iran.

The regime attempted to keep the pandemic a secret for months to protect its financial and diplomatic interests with China, thus sparking popular outrage. The author has spoken to several Iranians who report rising anti-Chinese sentiment in major Iranian cities, including mob violence against Chinese nationals in Tehran.

The regime’s strategy in courting China is likely to backfire. The economic dividends will prove to be minimal, as most Chinese companies have overwhelmingly complied with U.S. sanctions and are likely to do so in the future. At the same time, Tehran’s courting of Beijing is likely to fuel the fire of rebellion against regime authorities.

Nevertheless, Washington should be worried about an enhanced Chinese presence in Iran. Beijing has sought and built strategic military outposts in strategic countries such as Djibouti, Sri Lanka, and Pakistan. It is not hard to imagine Chinese ambitions to gain a permanent military foothold in the Persian Gulf, especially to compete with U.S. military superiority.

Washington should thwart Chinese ambitions through sanctions and public diplomacy. The United States should impose secondary sanctions against any Chinese companies that trade with or invest in Iran in violation of U.S. law. The United States should also highlight the colonial and imperialist nature of the agreement through its public messaging to Iranians and Persian language broadcasts. Washington should be clear that U.S. relations with a post-Islamic Republic Iran will be based on mutual respect and partnership, contrary to the colonial and imperialist mentality of the Chinese Communists.

Iranians seeking freedom from the dictatorial Islamic Republic still look to the United States as a source of inspiration. China, instead, represents repression and exploitation.

Alireza Nader is a senior fellow at the Foundation for Defense of Democracies, a nonprofit, nonpartisan research institute focusing on foreign policy and national security. Follow him on Twitter @AlirezaNader.