China's Secret Weapon to Control Its Near Seas: Enter the Maritime Militia 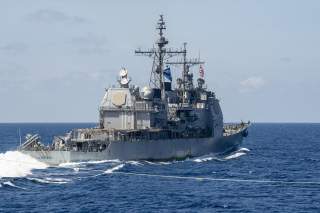 A mysterious fleet of militarized fishing vessels is the front-line force in China's escalating efforts to seize territory from neighboring countries.

That's the startling topic of a March 2019 discussion between U.S. Naval War College professors Andrew Erickson and Ryan Martinson and reporter Dmitry Filipoff from the Center for International Maritime Security.

"In the last decade or so, China has dramatically expanded its control and influence over strategically important parts of maritime East Asia," Erickson said. "It has done so despite opposition from regional states, including the United States, and without firing a shot."

"Today, a large proportion of Chinese-claimed maritime space is controlled or contested by other countries," Martinson said. He and Erickson called the disputed waters the maritime "gray zone."

"This is the status quo that Beijing seeks to alter. Its campaign to assert control over these areas has progressed over a number of years. Clearly, then, Chinese leaders are in no rush to achieve their objectives. And while China’s navy plays a very important role in this strategy, it is not the chief protagonist.

Beijing's secret weapon across the maritime "gray zone" is its maritime constabulary, the People’s Armed Forces Maritime Militia. An unofficial fleet of fishing vessels that occupy disputed seas and intimidate other countries' own ships.

"PAFMM personnel are often disguised as civilian mariners, especially fishermen," Martinson said. "Most do fish, at least some of the time. But they can be activated to conduct rights protection operations. And a new elite subcomponent is paid handsomely to engage in sovereignty promotion missions full-time without fishing at all."

"In recent years, there has been a push to professionalize the PAFMM," Erickson chimed in. "The Sansha City Maritime Militia, headquartered on Woody Island in the Paracels, is the model for a professional militia force. It is outfitted with seven dozen large new ships that resemble fishing trawlers but are actually purpose-built for gray-zone operations."

The PAFMM boats usually are unarmed, Erickson said. "They assert Chinese prerogatives through employment of a range of nonlethal tactics. In many cases, Chinese gray-zone ships are themselves the weapon: they bump, ram and physically obstruct the moments of other vessels.

"They also employ powerful water cannons to damage sensitive equipment aboard foreign ships and flood their powerplants," Erickson added. "Foreign states are often helpless to respond because China has the region’s most powerful navy, which gives it escalation dominance."

Japan and Vietnam have pushed back the hardest. But even those two countries have struggled to stop China's militia boats. "In July 2017, Beijing likely used gray-zone forces to compel Hanoi to cancel plans to develop oil and gas in its own [exclusive economic zone], in cooperation with a Spanish company."

Other countries have caved, Martinson explained. "The Philippines, for example, is apparently acquiescing to Beijing’s desire to jointly develop disputed parts of the South China Sea—areas that a 2016 arbitration ruling clearly place under Philippine jurisdiction."

"Meanwhile, China continues to push Manila in other ways. Philippine supply shipments to Second Thomas Shoal are still subject to harassment. China has recently concentrated a fleet of gray-zone forces just off the coast of Philippine-occupied Thitu Island, in an apparent effort to pressure Manila to discontinue long-planned repairs and updates to its facilities there."

The United States and its Pacific allies should work together to confront Chinese vessels, Martinson said. "The U.S. Navy can do more to help [allies] protect their legitimate interests and defend the legal norms and conventions that China’s behavior threatens to erode.

"In short, the United States should be out there with them, operating on the front lines of China’s seaward expansion. To that end, it must develop a range of nonlethal tactics that it can use to achieve local effects without resorting to use of force."