China's Tanks Are Getting 'Shields' to Protect from Rocket Attacks 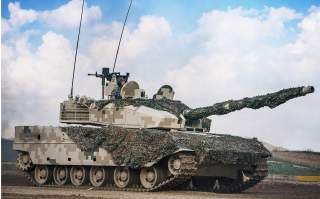 China’s light tanks are getting active protection systems to shoot down anti-tank rockets.

This may indicate that China has solved a problem bedeviling armored vehicles: how to fit anti-rocket defenses on light armored vehicles without adding prohibitive weight.

However, exactly how the Chinese active protection system (APS) works on the VT-5 isn’t clear. Western hard-kill APS—notably Israeli system like Trophy, which is being adopted by the U.S. military—work by using radar to detect incoming anti-tank projectiles, and then intercepting them with shotgun-like pellets. Russia’s Afganit is similar, and China unveiled its GL-5 hard-kill system in 2018.

But these systems are designed for 70-ton main battle tanks. And even then, Trophy weighs about 5,000 pounds, which caused problems with turret balance on M1 Abrams tanks during U.S. Army testing, according to a 2017 U.S. Department of Defense report.

The biggest problem is installing APS on lighter vehicles. For example, the U.S. Army is currently struggling with finding an APS that can fit the size, weight and power requirements for mounting on a Stryker light armored vehicles. The 2017 Department of Defense report also found that Iron Fist, another Israeli APS evaluated by the U.S. Army, couldn’t be added to the M2A3 Bradley infantry fighting vehicle because the vehicle “does not generate sufficient power to operate the APS.”

Interestingly, Chinese media said the “VT5 is still equipped with multiple explosive reactive armor units,” an older technology in which explosive tiles on the vehicle detonate and destroy incoming rockets before they penetrate the tank.

It’s not clear if the 35-ton VT5 will feature both an APS and explosive armor. If the vehicle can handle the weight on an APS, that would be impressive. If it can accommodate both explosive armor and APS, remarkable would be a better word.

It does appear that the VT5 is equipped with passive warning sensors. The vehicle has “a sensor system that sends a warning when the tank is aimed by a laser beam, which can notify the operators to take evasive maneuvers like releasing smoke,” Chinese media said.

Either way, the weight of adding defensive systems would seem to be a challenge for an export light tank whose selling point is lightweight and high speed. “Weighing from 33 to 35 tons, the VT5 is only about half the weight of main battle tanks like the US M1A2, allowing it to run faster with quicker acceleration, beating most other tanks by a large margin,” according to Chinese television. “The goal of the light tank is to operate in places where normal main battle tanks could not easily get to, like dense forests, deserts, water nets, rice fields and plateaus.”

The VT-5, which is similar to the Chinese army’s new Type 15 light tank (here’s a video of the Type 15), features a 105-millimeter cannon that can fire shells and missiles, the standard array of optical and laser fire control sensors, and a 1,000-horsepower engine. Since the classic design dilemma for tanks is firepower vs. protection vs. mobility, something has to give. In the VT5, the tradeoff is having steel armor, rather than the heavy depleted-uranium armor of a main battle tank like the Abrams.

For the export market that China is targeting—which includes poorer nations with mountainous or jungle terrain—a cheap, fast and lightweight tank might be worth the lack of protection. In the meantime, it will be interesting to see how—or if—China has solved the APS weight problem for light armored vehicles.