China's Ultimate Weapon to Fight a Trade War Against Trump: Its Currency? 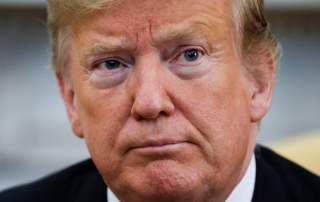 What happened to August vacations?

President Trump started the month with new tariffs on China. On Monday, China flailed in retaliation, with a tiny devaluation and a ban on farm imports that were already very small. US stocks nonetheless face-planted and the Department of the Treasury labeled China a currency manipulator. The heat must be getting to people.

Working backward, the Treasury supposedly has a thorough process and precise standards to determine whether countries manipulate exchange rates. On May 28, it said China wasn’t a manipulator. The RMB has since fallen a very modest 2.4 percent against the dollar. Not to cause trouble or anything but the Korean won fell 2.8 percent against the dollar over the same period.

China controls its exchange rate — the manipulator tag always fits in that sense. But it has done nothing in the last several months, or the last several years, to use its exchange rate for predatory purposes. Even if you disagree, what is the correct American response: a 2.4% across-the-board tariff? We’re working on 10 times that for the sake of IP theft and coercion, which have been orders of magnitude more harmful than currency.

The big news is Monday’s 3% plunge in the S&P 500. The drop isn’t based on anything immediately substantial — neither the RMB slip nor the easily reversed “ban” on farm imports matter at all to the broad US economy or corporate profits.

Moreover, by far the biggest setback to trade talks occurred three months ago, when Chinese negotiators were overruled by their bosses and tore up large portions of a draft agreement. It triggered the previous set of American tariffs and contributed to a 4.5% drop in the S&P in six trading days. This has been matched in the last three trading days, for much less reason.

Traders may fear the tiny devaluation signals trade conflict spreading to currency. This is highly unlikely, because a steep devaluation would be destabilizing for China. The basic problem is a non-commercial banking system translates to no market level for the RMB. If an extended depreciation is encouraged or permitted, RMB holders can only guess what level the government truly wants.

Last time around — four years ago — they chose large-scale capital flight rather than trusting the People’s Bank. China’s economy is slower, older, and more indebted than back then. Most importantly, it no longer has the foreign exchange to afford a repeat of 2015–6. That’s why the People’s Bank is likely to continue to defend the RMB near 7 to the dollar.

The most likely explanation is sentiment has flipped from probably a trade deal to probably no deal. Yesterday seems like a long time ago so forgive the repetition. At over $14 trillion in consumption expenditure, even tens of billions in higher costs for buyers of Chinese goods is minor. Drops in stock market capitalization of over $1 trillion compare to US household wealth of $113 trillion.

Derek M. Scissors is a resident scholar at the American Enterprise Institute (AEI), where he focuses on the Chinese and Indian economies and on US economic relations with Asia. He is concurrently chief economist of the China Beige Book.