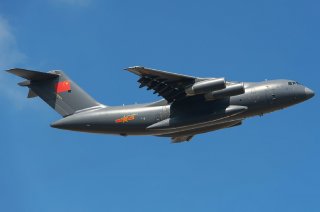 Whatever one concludes about China’s response to Coronavirus, there is little doubt that the People’s Liberation Army (PLA) has been on the front line of the effort to stem the virus from an early point. The pages of China’s military newspapers are filled with heroic accounts of the work of Chinese military nurses and doctors.  An important symbol of the PLA’s effort to send medical personnel and related supplies into Wuhan has been the appearance of the Y-20 large transport aircraft. These new planes could be seen disgorging supplies and medical detachments at the epicenter of the crisis since mid-February 2020.

One of the reasons why every country’s military appreciates such impressive heavy lift capabilities is that they can be critical to so many kinds of military operations, from conveying crucial supplies for humanitarian relief to rescuing nationals abroad in a tight spot (non-combatant evacuation) to delivering elite paratroopers to far-flung battlefields. On the latter point, there seems to be a noticeable uptick in the PLA’s interest in airborne operations recently, but here we will dwell on another, slightly more subtle, but potentially even more significant strategic impact of the advent of the Y-20 era for Chinese aviation. This concerns the development of the Y-20 for aerial refueling.

That subject was capably analyzed in this forum a few years back. In that piece, author David Barr asserted that Beijing would likely develop the Y-20 for refueling purposes. He noted that aerial refueling has been absolutely critical to U.S. military operations in distant theaters, such as Afghanistan. Thus, Barr explains that 4,500 aerial refueling sorties were flown mostly by USAF KC-135s and KC-10s to accomplish roughly 6,500 strikes in just the first few months of that war during late 2001.

Barr concluded that China has learned from observing this and other U.S. interventions about the pivotal role of aerial refueling. Observing the progress of Y-20 development, he made the disturbing projection that with this new aircraft modification, Beijing will gain “the ability to put U.S. and partner armed forces operating outside the second island chain, such as Alaska and Hawaii at risk.” An early 2019 (2/no.574) article from the Chinese magazine Aerospace Knowledge [航空知识] offers further insights regarding this important program.

The Aerospace Knowledge [航空知识] analysis begins with an important confirmation of Barr’s hypothesis. The very first sentence sets out the new milestone that in early December 2018 the “specially modified aircraft [特种机改型]” Y-20 successfully undertook its very first aerial refueling mission. This is just in time, according to this article,” since the H-6 refueling aircraft in China’s inventory are said to be “too old,” while the Il-78’s imported from Russia are “too few” for China’s requirements. Comparing the Y-20 program to others around the world, the Chinese analysis makes the important point that most other aerial refueling planes have been converted from successful civilian airliners.

However, it is said that the Y-20’s military origins could still have advantages for the aerial refueling design. For example, Y-20 was built to fly from rather austere and short runways. This piece claims that Y-20 can loft 110 tons of fuel. Thus, it is assessed that the new aerial refueling aircraft can provide 3-4 times the tanking capacity of the H-6, according to this Chinese analysis.

The piece admits upfront that the capabilities of Y-20 in the aerial refueling role do not quite match up to the latest Western equivalents. The major reason is that the Y-20 will apparently employ so-called “soft gas line technology [软管加油技术]” versus the more efficient “hard pipe [硬管].” As explained in the article, the hard pipe allows for much faster transmission of fuel.  For example, the relatively new Airbus A330MRTT is discussed in the article as having nearly 100% faster refueling capability via the hard pipe at 4,540 liters per second. Thus, such an advanced system is quite “suitable for the refueling of large aircraft,” while the Y-20 will do better refueling fighters and attack aircraft. Similar to the Russian Il-78 Midas, the Y-20 will be able to refuel three fighters simultaneously or one large aircraft.  Indeed, thanks to the experience employing the Midas, China is said to have “rich experience” already with soft line tanking. The new Chinese system will employ video cameras to assist the crew with the tanking process.

In fact, a major theme of the article is that the Y-20, at least in the near term, will not match the most efficient systems flying in the West, such as the hard pipe Airbus system mentioned above. On the other hand, it is suggested that “… there still exists the possibility for hard-pipe tanking [仍然存在采用硬管加油的可能性]” and the Y-20 modification to that system “will not be difficult [改装并不困难].” Indeed, an additional burden on Chinese aircraft designers has been the apparent need to ensure that these Y-20s will remain “dual-use [兼职]” platforms. Again, like the Russian Il-78 Midas tankers imported into China, the first batch of Y-20 refueling aircraft will also be able to serve as cargo aircraft.  Thus, it will retain the large nose hatch, according to this Chinese report. The author laments that China is still far from a time when it has both a large fleet of cargo aircraft and also a large fleet of aerial refueling aircraft.  It is further pointed out that in the coming era of China’s H-20 bomber, that future may well come about.

For the near term, the priority for Beijing’s military planners is that “the most important role for tanker aircraft is to resolve the dilemma of tactical aircraft concerning take-off weight and whether to carry more fuel or more ordnance [解决起飞重量有限的战术机多载油还是多载弹的矛盾, 是加油机的重要作用].” For China’s strike aircraft, such as the J-16 and Su-30, both heavy aircraft that will need to fly low, more tankers will afford them significantly more loiter time over the battle space, for example in Taiwan or South China Sea scenarios. It is assessed in this Chinese analysis that each Y-20 would have sufficient fuel to top off 18 Su-30s, enabling them to operate beyond a distance of 1,000km.  Interestingly, the article also mentions advantages for China’s western flank (e.g. Tibetan Plateau), where higher altitude airfields complicate takeoff weight.

In the end, the analysis concludes that the advent of the Y-20 aerial refueling aircraft “first of all amounts to the key equipment to cope with our military’s extremely urgent need for long-range combat capability [首先成为解决我军远程作战‘燃眉之急’的顶用装备].” Unquestionably, ever more and more capable aerial Chinese refueling aircraft will strengthen Beijing’s reach beyond the first island chain.  As pointed out above, that refueling capability is not nearly yet on par with that of the U.S. military, but Chinese engineers and pilots are leaning hard in that direction with a disturbing kind of urgency.

Most American strategists assume that any possible fight with China would take place almost entirely in the western Pacific.  This author was himself surprised recently to read a different Chinese article explicitly viewing Alaska as a likely target for Chinese bombers.  China’s navy is also looking for the “soft rib” of U.S. power projection that might well target logistics nodes in the eastern Pacific or even in the Atlantic.  These all seem like excellent reasons for the diligent hardening of America’s rear areas. Washington should also dampen the Cold War-type rhetoric that is now feeding dangerous, spiraling tensions between the world’s two superpowers.