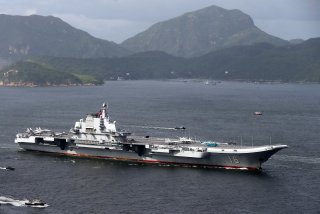 The People’s Liberation Army Navy sailed the aircraft carrier Liaoning through the Miyako Strait just south of Okinawa earlier this week. The Liaoning also conducted drills with J-15 fighters and other embarked aircraft.

The operation was reported by the Chinese government-backed newspaper the Global Times. It may be considered by some as a “show of force” to intimidate Japan.

Along with fighter jets, the Chinese exercise also included operations with Z–9 and Z-18 helicopters, a new Type 055 destroyer, a type 052 destroyer, two frigates, and a supply ship.  Japan dispatched the Izumo, a helicopter carrier, and fighter jets to monitor the Chinese naval activities.

Chinese aircraft carriers could project power and conduct air attacks against either Japan or Taiwan from this area. The Chinese operation appeared to be an effort to replicate a U.S. Navy Carrier Strike Group, with destroyers and frigates escorting an aircraft carrier as it carries out attacks.

The Japanese Maritime Self-Defense Force and supporting F-35s would be key to counter any Japanese attack. Even a small number of Japanese F-35s would be well-positioned to counter Chinese J-15 carrier-launched jets. If China launched attacks against Okinawa or Southern Japan, it might not be able to attain air superiority necessary to achieve success.

The Global Times newspaper reports that the J-15 is now substantially upgraded with new radar, weapons pylons, and infrared search and track. However, the J-15 is a fourth-generation fighter and unlikely to challenge, or even see an F-35 before it is destroyed from the air.  Chinese J-15s would be poorly matched against Japanese or South Korean F-35s. China is developing a carrier-launched variant of its fifth-generation J-31 fighter, but it is not yet ready for operational service.

The Miyako Strait is also just a few hundred miles from mainland China. Chinese land-based fifth-generation J-20 aircraft could reach the area from that distance. A group of Chinese J-15s could present a much more significant threat to Japan and Taiwan if it were supported by Chinese J-20s.

China’s proximity to Japan and Taiwan, coupled with these air threats and the pace at which China is building aircraft carriers, is likely a key reason why Japan recently secured a procuring a significant number of F-35s.