Is the Chinese Communist Party Really Trying To Take Over the World? 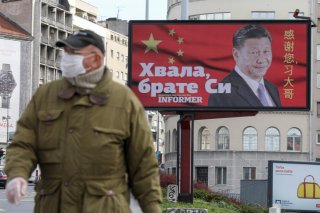 In a blog post entitled “It Is Time For a Libertarian Case Against China,” Tanner Greer responds to a piece in Reason magazine by Dan Drezner, in which Dan argued that “There is No China Crisis.” Greer says that libertarians need “to take the [China] problem with the seriousness it deserves.”

Not that it matters much, but if he wants to make “a libertarian case against China,” is Greer even a libertarian? Kind of, sort of, maybe, but not really. He says:

I like libertarians and libertarianism. I can’t bring myself to identify as one, but someone recently described me as “libertarian adjacent,” and I will not dispute the label.

But regardless of whether Greer identifies as a libertarian, the issue of how to deal with a rising power that is authoritarian and looking to expand its influence in world affairs is certainly one of the biggest foreign policy challenges the U.S. government faces. We do need to take it seriously. (And if you read Dan’s piece, I think it’s clear that he does take it seriously, in the sense of offering thoughtful and nuanced analysis). How people in the United States (including, but not limited to, libertarians) think about this issue is extremely important. Having gotten so many of our foreign policy challenges wrong in recent decades, it would be nice to get this one right.

But in order to think about it clearly and rationally, we need to understand exactly what China’s goals are, in particular in the global arena. This post won’t answer that question fully, because it would take much longer than a blog post to do so. But we do want to push back on some of Greer’s characterizations, which reflect the overheated rhetoric of many China hawks. Greer says this about President Xi Jinping and the Chinese Communist Party:

What [Liza] Tobin describes as “a new path to peace, prosperity, and modernity” … Xi has variously described as “Chinese wisdom and a Chinese answer to solving the problems of the mankind,” “a new [achievement] … in the history of the development of human society,” a “new and greater contribution to mankind,” and “new advance in political civilization.”[8] Notice the scope of what the Party hopes to reshape. They hope not to remake China, nor even Asia, but “human society,” “civilization,” and “mankind.” As Politburo member Yang Jiechi exhorted in 2018, the time has come for the Party to “energetically control the new direction of the common progress of China and the world.” [9]

Clearly, then, based on this language, China is out to dominate the world, right? Not so fast. First of all, relying too much on official government statements (of any government!) may be a mistake, in part because governments have many audiences in mind when they speak (importantly, their own citizens). But if you are going to use them, you need the full context. In the first sentence that Greer quotes, Xi does, in fact, use the quoted words. But when you read them in context, you don’t get the impression that the Communist Party hopes to “remake,” as Greer puts it, “human society,” “civilization,” and “mankind.” For example, the speech by Xi says this: “The Communist Party of China strives for both the wellbeing of the Chinese people and human progress. To make new and greater contributions for mankind is our Party’s abiding mission.” That sounds like the usual generalities of a government’s public relations campaign rather than an objective of remaking the world.

And with regard to the phrase “energetically control the new direction of the common progress of China and the world,” translations are difficult, and word choices between languages are not always clear, but we offer this translation of the broader passage at issue:

Again, this seems like somewhat normal and expected government‐​speak.

So what are the actual goals of the Chinese government in world affairs? That’s an area where we need more analysis from unbiased experts. For security hawks, it’s very convenient to have found a new “existential threat” that can justify a confrontational foreign policy and more military spending. But in order to craft the appropriate policy here, we need to get past the self‐​serving assumptions of certain members of the foreign policy establishment, and sort out exactly what we are dealing with in terms of the Chinese government’s global ambitions. The “case against China” needs examining, but an over‐​excited rush in one direction could be very damaging (and has been before).

This article by Simon Lester and Huan Zhu first appeared in CATO on May 7, 2020.