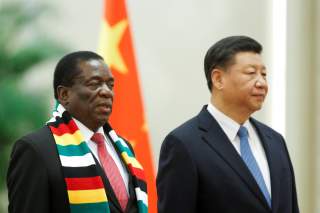 Chinese big tech companies are using Zimbabwe as a large research laboratory to develop facial recognition that will help them identify and track black people, The Financial Times reported Monday.

ZTE and other Chinese tech behemoths are shaping the United Nations’s architectural standards for facial recognition technology, according to leaked documents FT obtained. The standard will reportedly help China’s tech industry open up new markets in the Middle East and Africa.

Such standards are often accepted by Africa and other developing nations that lack resources, experts say.

“African states tend to go along with what is being put forward by China and the ITU as they don’t have the resources to develop standards themselves,” Richard Wingfield, head of legal at Global Partners Digital, told reporters.

The standards will help ZTE improve the accuracy of recognition algorithms, particularly with respect to black people, the report notes.

The new ITU proposal stipulates a requirement that companies must store detected facial features in a database, which will include identifying information, such as race, skin color, facial curvature, among other demographic features.

“A deal between Chinese facial recognition company CloudWalk and the government of Zimbabwe means the latter will send data on millions of African faces to the Chinese company to help train the technology,” FT’s report Monday noted.

China’s influence in setting the ITU standards is growing. Academics believe China considers these standards pivotal as it seeks dominance in artificial intelligence.

“The drive to shape international standards . . . reflects longstanding concerns that Chinese representatives were not at the table to help set the rules of the game for the global Internet,” according to a 2018 report from New America Foundation.

The report added: “The Chinese government wants to make sure that this does not happen in other ICT spheres, now that China has become a technology power with a sizeable market and leading technology companies, including in AI.”

Whereas ITU shapes standards in the Middle East and Africa, Europe and North America’s standards are governed by IETF, IEEE and 3GPP. This is not China’s first foray in data accumulation in Africa.

The Chinese government, for instance, built and financed a $200 million complex holding the African Union (AU) in Ethiopia. The building was completed and handed over to the Ethiopian government in January 2012. Media reports have since cast a negative light on China’s intentions.

France’s Le Monde published an investigation in January 2018 showing that from 2012 to 2017, servers based inside the AU’s headquarters were transferring data every night to unknown servers in Shanghai. It was also reported at the time that microphones hidden in desks and walls were detected and removed during a sweep for bugs.