Chinese Company Refuses to Disable Its Drones in Ukraine 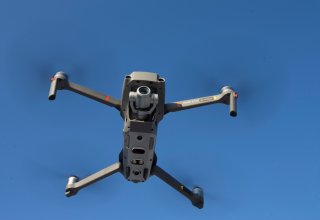 Ever since Russia invaded Ukraine, the notion of a no-fly zone over Ukraine has been bandied about. Ukrainian president Volodymyr Zelensky has called for one, including in his address to Congress last week.

However, President Joe Biden has resisted enacting a no-fly zone, as has the North Atlantic Treaty Organization (NATO), as it would obligate the United States or NATO to shoot down Russian planes and therefore escalate the situation into a possible world war.

Now, the Ukrainian government has another request related to the weapons being used by Russia in the war—but it’s not of a government, nor related to traditional planes. Instead, it has to do with drones from one specific company. The company in question is DJI, a Chinese drone manufacturer.

"In 21 days of the war, Russian troops have already killed 100 Ukrainian children. They are using DJI products in order to navigate their missile[s],” Mykhailo Fedorov, Ukraine’s vice prime minister and minister of digital transformation, said on Twitter last week. “Are you sure you want to be a partner in these murders? Block your products that are helping Russia to kill the Ukrainians!”

According to Tom's Guide, DJI has instituted no-fly zones in the past, including in relation to the use of drones by ISIS.

DJI replied to Fedorov’s tweet with a statement of its own. First, the statement made clear that DJI products are meant for civilian and not military use. But they also said that the Aeroscope system that is built into DJI drones cannot be turned off, and DJI is not able to identify and verify a user’s location.

“DJI has not changed the functionality of our Aeroscope system in any way in Ukraine, and many Ukrainian AeroScope units are still functioning,” the statement added. “DJI’s sales and service in Ukraine have been consistent and unchanged.”

The statement went on to say that if Ukraine formally requests "geofencing" in Ukraine, they will “arrange it according to our policy,” but added that it would apply to all of its drones in the country, regardless of who has them. “Please be aware that geofencing is not foolproof, and if the user does not connect to the internet to update the geofence data, the new geofence will not take effect for the drone.”

DJI’s North American spokesman, Adam Lisberg, told Tom’s Guide that "we deplore any use of our drones to cause harm. ... We try and stay out of geopolitical issues. We just want to make drones and cameras."