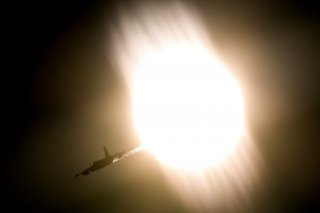 A group of Chinese engineers brought down a large, unmanned aircraft using a new electromagnetic pulse-type weapon in what could be China’s first test of EMP weaponry. First reported on by the South China Morning Post, the test reportedly concentrated a powerful beam of electromagnetic energy on the aircraft during flight at 1,500 meters, or nearly 5,000 feet in altitude.

According to the report, the aircraft behaved “unexpectedly” after an EMP beam struck the aircraft.

The aircraft “did not drop immediately, but veered abruptly from one side to another for a period. Flight data and analysis of debris recovered from the crash site suggested that sensitive electronic devices, including its satellite navigation system, cryoscope, accelerometer, barometric altimeter, and communication device, had not been damaged. The battery and motors also functioned properly until collision.”

In all likelihood, the aircraft’s “flight control system malfunctioned, issuing an error control command,” an engineer involved with the live-fire event explained.

Unlike kinetic or explosive weapons, electromagnetic pulse-type weapons rely on ‘frying’ electrical systems, rendering them useless. Thus, airplanes, drones, trucks—anything that relies on onboard electronics are vulnerable unless specifically hardened against EMP threats.

Although not the same kind of weapon, the United States has made progress in recent years in developing a laser-type weapon, going so far as to arm some active-duty Navy ships with a laser prototype while on patrol.

Unlike EMPs, laser weapons rely on intensely focused energy like microwaves or particles, though both require huge amounts of energy to be generated to be effective. EMPs are often associated with nuclear weapons, as large electromagnetic pulses are a byproduct of nuclear explosions. According to the report, the world’s highest recorded power output for an EMP-type weapon is around twenty gigawatts, though the maximum output may be as high as eighty gigawatts.

A video animation of the THOR system from earlier this year shows an air-mobile containerized THOR system taking down swarms of drones at a remote desert outpost. Though flying in tight formation directly for the base, the entire swarm quickly falls to the ground simultaneously, presumably due to a loss of power.

Though still in their infancy, electromagnetic pulse-type weapons could potentially revolutionize warfare. Could they herald the arrival of real-life Star Wars?