Chinese Nuclear Weapons 101: Everything You Could Ever Want to Know 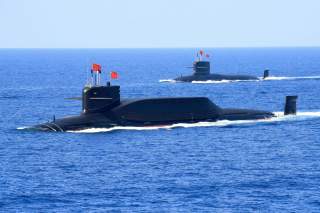 Key point: Beijing has a modestly-sized arsenal, but it is large enough to deter Washington and Moscow. In fact, China is currently upgrading its nuclear weapons.

The People’s Republic of China’s nuclear arsenal is achieving greater notoriety, as Beijing’s growing economy funds an upgrade of its entire military. The development of mobile intercontinental ballistic missiles (ICBMs) and a new class of ballistic missile submarines are evidence that China’s nuclear arsenal is becoming increasingly sophisticated.

China’s nuclear force, while modernizing, is a modest one by the relative standards of nuclear powerhouses like the United States or Russia. Beijing has shown little interest in developing a large nuclear stockpile, as it does not view nuclear weapons in the same vein as larger nuclear powers—viewing such weapons within a strictly defensive context with much less operational use.

For decades, China placed the bulk of its defense policy in a concept known as  “People’s War,” a strategically defensive/tactically offensive war plan that involved luring an invader deep into Chinese territory before destroying them with conventional armies and guerrilla forces. Within that context, against China’s nearly endless supply of manpower, nuclear weapons seem less appealing.

In fact, early on China had no interest in building a nuclear weapons arsenal; Mao described them as “paper tigers” that only appeared dangerous. Chinese opinion shifted in the mid-1950s, with a combination of the Korean War, Taiwan Strait Crisis—in which a nuclear-armed America protected Taiwan—and Soviet offers of nuclear assistance.

For the most part, China developed nuclear weapons to achieve basic technological parity with the United States, Soviet Union, France and the United Kingdom. Although China built this arsenal, it never placed a high priority on constructing an effective nuclear weapons force capable of quick response.

At least for now, China appears to be content with this bare minimum nuclear deterrent: although it has not officially announced a moratorium (the only P5 country to not have done so), it is believed to have stopped production of fissile materials in the mid-1980s, leaving the country with enough to produce roughly 300 nuclear weapons.

Beijing has concentrated on a countervalue strategy, acquiring a small force of ICBMs armed with thermonuclear warheads. The DF-5 ICBM is armed with a single 5-megaton warhead. Detonated over Los Angeles (Chinese remarks around its nuclear weapons and Los Angeles have been the subject of conversation in recent years), a 5 megaton warhead would have a fireball more than two miles wide, and guarantee third degree burns 15 miles from the point of detonation.

One key tenet of Chinese nuclear policy is its “no first use” pledge. Admirable on the face of it, the pledge was also rooted in Chinese opinions that nuclear weapons in general were really much less intimidating than commonly believed. And, as Jeffrey Lewis noted in his newly released Paper Tigers: China's Nuclear Posture, “Threats by China to use its nuclear weapons against weaker states would undermine Chinese claims that the numerically superior U.S. nuclear force had little coercive value.”

Size of the Force and Key Technological Developments:

As of 2012, the U.S. Department of Defense estimated that China’s land-based nuclear arsenal consisted of 50-75 intercontinental ballistic missiles (ICBMs) and 75-100 medium range ballistic missiles incapable of targeting the United States. Compared to the U.S. arsenal of 450 ICBMs, this is a modest force.

China’s first attempted to deploy thermonuclear weapons on long-range missiles. Specifically, the DF-4/CSS-3 ICBM, which was a two stage liquid-fueled missile that could reach as far as Guam or Moscow. This was far enough to hold most of America’s military assets west of Hawaii and the capital of the Soviet Union at risk. The circular error probable (the radius of a circle within which an average of fifty percent of a weapon’s warheads will land) is estimated at 1.4 to 3.5 kilometers. To make up for this relative inaccuracy, DF-4 missiles carry warheads with yields between 2 and 3 megatons.

A later design, the DF-5, can strike targets in western Russia and the western United States. An estimated 18 DF-5s are currently in service.

The DF-4/5 ICBMs are fixed weapon systems, but China now appears to be shifting to mobile ICBMs. The DF-21A medium range and DF-31A intercontinental range missiles are launched from a wheeled launch vehicle that can be moved in and out of China’s extensive network of tunnels and scattered across a large road network.

China’s first ballistic missile submarine, the Xia-class, was launched in 1981. There were persistent rumors that it caught fire and sank pier-side in the 1980s, but the submarine is still functional as of 2014. Although equipped with 12 JL-1A ballistic missiles, it has never conducted a nuclear deterrence patrol.

China is currently building a force of approximately five second-generation Jin-class ballistic missile submarines. Each Jin carries at least 12 JL-2 ballistic missiles. Technologically, however, they are still inferior to U.S. designs — the U.S. Navy’s Office of Naval Intelligence has assessed them as being noisier than Soviet late 1970s-era Delta III submarines. Also troubling, Each Jin-class submarine must travel to the North Pacific in order to bring the United States into range of its missiles.

Nukes in the Air?

Although aircraft was the first means by which China could deliver nuclear weapons, the air component of Beijing’s nuclear arsenal has fallen out of favor over time. In the past, China’s nuclear capable aircraft included the Hong-6 (H-6) and Qian-5A (Q-5A) attack bombers equipped with gravity nuclear bombs. In the 1990s, the James Martin Center for Nonproliferation Studies estimated that China had about 150 gravity nuclear bombs for its aircraft, with the vast majority designed for the H-6 bomber. More recent estimates suggest that China only has roughly 40 of these nuclear-capable air-to-surface missiles.

However, China’s new bomber, the H-6K, is expected to enhance the third leg of China’s nuclear triad considerably. Indeed, as a state-owned Chinese media outlet noted of the H-6K in 2013, “The nuclear-capable Changjian (long sword)-10 cruise missiles it [the H-6K] carries have a range of 1,500-2,000 KM, effectively extending the bomber’s combat range to 4,000-5,000 KM - long enough to reach Okinawa, Guam and even Hawaii from China’s mainland.”

China’s nuclear program may indeed one day seek to achieve parity with big nuclear powers like the United States and Russia. Beijing’s basic notions about nuclear weapons were first conceived under ideological constraints while the country was much poorer than it is today.  However, if relations were to turn quite hostile with any of the big nuclear powers China could quickly change its thinking.

That having been said, China gives no indication of doing so, and the amount of fissile material available puts a hard limit on the number of nuclear weapons it can currently deploy.

Kyle Mizokami is a writer based in San Francisco who has appeared in The Diplomat, Foreign Policy, War is Boring and The Daily Beast. In 2009 he cofounded the defense and security blog Japan Security Watch. This first appeared in January 2015.