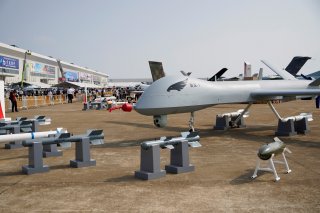 China’s new Wing Loong-1E armed drone was on display at the Singapore Air Show this week after making its debut flight in 2021.

The Wing Loong-1E is a new addition to the family of Wing Loong drones built by the state-owned Aviation Industry Corporation of China.

“The Wing Loong-1E is still distinguishable as a Wing Loong-1 drone, but it made some changes to aerodynamic design, including adding upward-pointing winglets to the tip of the main wings like a Wing Loong-2,” said a story in the Chinese government-backed Global Times newspaper says.

In an apparent effort to lighten the weight of the drone, and increase speed and endurance, Chinese developers are building the new drone almost entirely with composite materials.

“By using composite materials for the entire aircraft, which is an advanced technology, the drone must be lighter and sturdier than the original Wing Loong-1, and it will likely enjoy longer range and endurance as well as higher efficiency and reliability,” the Global Times says.

The Global Times compares the Wing Loong-1E to the MQ-1C Gray Eagle operated by the U.S. Army.

Unlike its predecessor, the MQ-1 Predator, the Gray Eagle relies upon a heavy fuel engine to offer increased horsepower and improved fuel efficiency.

Those capabilities of the Wing Loong-1E would determine if it can rival the Gray Eagle. A difference in computing and data processing could mean it is less capable than the American drone.