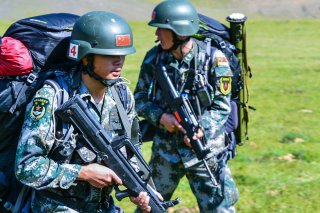 Last week Chinese state media released footage of the People's Liberation Army's (PLA's) next-generation assault rifle, the QBZ-191. This would replace the QBZ-95-1 bullpup that has been in service since 1997. With this new assault rifle China appears to be adopting a weapon with a more "traditional" layout – including a magazine forward of the pistol grip.

The video, which was released on state-owned broadcaster China Central Television (CCTV), marks the first time the weapon was seen since it was revealed during a Military Parade last October to dedicate the sevenieth anniversary of the PLA. A carbine version was seen in state-media with a 10.5-inch barrel and was reported to be used as a personal defense weapon (PDW) for vehicle crews and not front line soldiers.

The infantry version will have a 14.5-inch barrel while the marksman version will have an even longer barrel. Visually the weapon has characteristics to the American AR15/M16 platform as well as modern European assault rifles including a full-length Picatinny rail on top.

The "unofficial" name of the weapon, QBZ-191, comes from the Chinese "Qīngwǔqì Bùqiāng Zìdòng" – literally meaning "light weapon, rifle, automatic" – while the digits denote the year of development, in this case, 2019. It isn't so clear however where the extra "1" comes from except that this may denote the first model of the new weapon.

The new rifle is a gas-operated short-stroke pistol assault rifle, and is chambered in the standard 5.8x42mm caliber but it utilizes a new type of round that has been designed to perform better on medium to long-range. The QBZ-191 in its carbine configuration has an effective range of 300 meters, while the infantry assault rifle version is effective to 400 meters. Both have a rate of fire of 750 rounds per minute (rpm). According to the FirearmBlog, the QBZ-191 is selective fire with semi-auto and full-auto modes but no burst fire.

This move to a more traditional layout and away from the QBZ-95's bullpup layout is notable for a few reasons. First, some three million of the older weapons were produced, and it was widely exported to various Chinese partner states including Laos, Myanmar, Pakistan, the Philippines, Rwanda and Sudan – so it will be worth noting if China continues to export the QBZ-95.

However, as The National Interest has noted in the past, a bullpup layout has some general downsides: users may find the weapons ergonomically awkward while users must also place their face closer to the action for aimed fire. The QBZ-95 also has a notoriously bad reputation for some of its design features, notably, there is no safety near the trigger hand and the absence of a bolt hold-open device.

Given the issues with the QBZ-95, it certainly seems as if the PLA is looking for a fresh start with the QBZ-191.