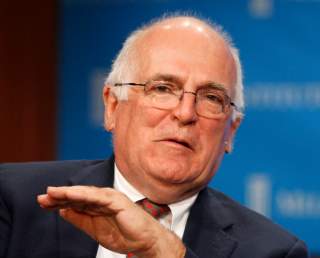 A book coming out Nov. 26 will shed light on interactions in 2016 between dossier author Christopher Steele and Sir Richard Dearlove, the former chief of British intelligence who has close ties to alleged FBI informant Stefan Halper.

In “Crime in Progress,” Fusion GPS founders Glenn Simpson and Peter Fritsch wrote that Dearlove surprised Steele during a meeting in London in December 2016 with information that the British government “had suspicions about links between Russia and members of the Trump campaign.”

Dearlove also told Steele it appeared that British authorities “had made a political decision not to push the matter further,” Simpson and Fritsch write in the book, according to a review from The Guardian.

The Fusion GPS book, which will be released Tuesday, is likely to raise questions about Dearlove’s activities in 2016, including whether he was involved in providing the information to British authorities that he mentioned to Steele.

Steele at the time was investigating Donald Trump and his associates on behalf of Fusion GPS.

Dearlove has largely avoided scrutiny in Russiagate despite his connections to Steele and Stefan Halper, the alleged FBI informant.

Dearlove and Halper in February 2014 hosted a private dinner at Cambridge for Michael Flynn, who then served as director of the Defense Intelligence Agency.

Virtually nothing was written about the Flynn visit until early 2017, when stories began to surface that British and American intelligence officials were concerned about Flynn’s interactions at the Cambridge event with a Russian-British academic named Svetlana Lokhova.

On June 5, 2018, The Washington Post reported that Dearlove and Halper grew “disconcerted” at the attention that Flynn paid to Lokhova. Other news outlets have reported that concerns about Flynn were passed to American and British intelligence officials.

Lokhova, who studied Soviet-era espionage at Cambridge, has asserted that the stories falsely implied that she and Flynn had an affair. She has denied the insinuation, and there has been no evidence that Lokhova met with Flynn beyond the Cambridge event, which was attended by more than a dozen other people.

Lokhova has sued Halper, accusing the retired professor of planting rumors about her and Flynn in the media. She has also questioned why Halper extended an invitation to her in January 2016 to a small dinner gathering at his Cambridge home.

Lokhova has said she and Halper rarely interacted at Cambridge, and did not get along when they did so. She has also noted that the invitation was extended at around the same time Flynn officially joined the Trump campaign.

The Daily Caller News Foundation reported March 25, 2018, before Halper was reported to be an FBI informant, that he made contact in 2016 with three Trump campaign advisers: Carter Page, Sam Clovis and George Papadopoulos.

Halper met Page on July 10, 2016, at an event held at Cambridge which Dearlove also attended.

In September 2016, Halper invited and met with Papadopoulos in London under the guise of discussing academic research on energy issues. Halper was accompanied by an assistant he identified as Azra Turk. The New York Times reported May 1 that Turk was a government investigator operating under an alias.