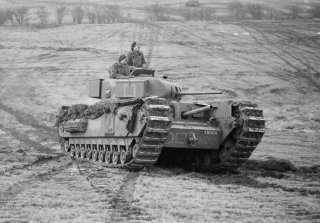 Britain’s tank design during World War Two roughly divided armor into two categories, fast lightly-armored cruiser tanks that sacrificed armor for speed, and slower, more heavily armored infantry tanks that accompanied dismounted infantry and provided them with additional firepower. The Churchill tank was the later—and one of the heavier tanks of the Second World War.

The Churchill tank went through several variants as the war progressed, and was steadily upgraded with thicker armor and a heavier main gun.

Initially, the Churchill had two main guns. The Churchill’s turret housed a 2 pounder (40-millimeter) gun which was for use against enemy armor, and a hull-mounted 3-inch howitzer for use in supporting infantry. The 3-inch howitzer fired mainly high-explosive rounds and had limited capabilities against armored targets. It was of limited utility, as the gun couldn’t be aimed independently—the entire tank had to be turned for aiming the gun.

Later variants dispensed with the 3-inch howitzer all together, finding that a bow-mounted Besa general-purpose machine gun was more effective than a howitzer in supporting infantry. The Besa also simplified ammunition logistics, as the 7.92-millimeter ammunition it used was the same as Germany’s standard rifle and machine-gun round. Captured German ammunition could thus supplement the Besa’s.

The Churchill’s engine was essentially two engines that ran opposite each other. Output was around 350 horsepower. Although this was initially enough output for the original Churchills, it was quickly insufficient due to weight increases. Later variants of the Churchill featured increasingly thick armor plating for better resistance to armor-piercing rounds. While armor upgrades did increase the tank’s protection, the Churchill’s engines were never upgraded, leaving the Churchill with increasingly insufficient speed, though it could traverse steeper slopes than virtually any other tank.

Later Churchills exchanged the 2 pounder for a larger 6 pounder main gun. At 57 millimeters it had superior penetration than the 2 pounder, and benefited from using armor-piercing sabot rounds. Despite the increase in effectiveness against armored targets, the 6 pounder gun did not do so well against infantry and other unarmored targets.

Some British tankers in North Africa scavenged 75-millimeter guns from knocked out Sherman tanks, and used these in place of the 6 pounder. Though high-explosive rounds were plentiful, the Sherman gun lacked the armor-piercing capabilities of the 6 pounder.

In recognition of the need for a dual-purpose gun, the last Churchill variants were equipped with an even larger 95-millimeter gun that was supplied with both anti-armor and high-explosive rounds, bridging the gap between anti-armor and anti-personnel roles.

Perhaps one of the Churchill tank’s most noteworthy successes was during the North African campaign, where Churchills played a prominent role as some of the heaviest Allied tanks. Near Tunis, a Churchill faced a German Tiger I tank, in some ways its counterpart as one of the German heavy tanks in North Africa.

A shot from the Churchill hit the Tiger’s turret low and jammed the turret ring. Two other shots found their target and forced the German tanker crew to bail with their wounded. The Tiger I was only lightly damaged and was later used by the Allies to gauge the German Tiger I’s capabilities.

Though the Churchill was initially quite underpowered, steady upgrades to firepower complimented the cruiser’s respectable armor, and helped form the basis of the “universal” or main battle tank in post-WWII tank design.