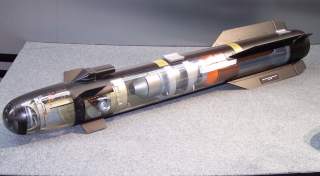 In a joint effort to reduce the potential for civilian casualties resulting from U.S. air strikes, the Defense Department and Central Intelligence Agency have reportedly developed a specialized variant of the ubiquitous Hellfire missile that can best be described a 100-pound flying switchblade.

A fascinating report in the Wall Street Journal based on accounts from multiple current and former U.S. officials describes the R9X variant, covertly deployed against targets in Syria and Yemen since 2017, as a Hellfire with an inert warhead, essentially a modern update to the "Lazy Dog" bombs that U.S. soldiers would release at terminal velocity from aircraft above the battlefields of Korea and Vietnam.

The logic behind the R9X isn't that different from the other forms of kinetic bombardment pursued by the Pentagon in recent decades from the Lazy Dogs to the Navy's electromagnetic railgun and associated hypervelocity projective so viscerally lethal: you're hitting the enemy with something very hard and very dense, moving very fast.

But for the R9X, the moment before impact is where things get, uh, dicey. From the Wall Street Journal (emphasis ours):

A modified version of the well-known Hellfire missile, the weapon carries an inert warhead. Instead of exploding, it is designed to plunge more than 100 pounds of metal through the tops of cars and buildings to kill its target without harming individuals and property close by.

To the targeted person, it is as if a speeding anvil fell from the sky, the officials said. But this variant of the Hellfire missile, designated as the R9X, also comes equipped with a different kind of payload: a halo of six long blades that are stowed inside and then deploy through the skin of the missile seconds before impact, shredding anything in its tracks.

Indeed, that's exactly what happened to Ahmad Hasan Abu Khayr al-Masri, the al Qaeda second-in-command who, according to the Wall Street Journal, the CIA allegedly targeted with an R9X in Syria's Idlib Province in February 2017. Here are some photos from the strike's aftermath, courtesy of former British Army officer-turned-digital investigator Nick Waters:

Anyone remember those weird strikes, probably by US forces, mostly on cars, where there didn’t seem to have been an explosive payload, but everything inside the car was very dead?

Well, here it is, a secret kind of Hellfire:https://t.co/kTx8s5r4kB