Clever: How 3D Printing Is Quickly Putting Damaged Tank Back Into Action 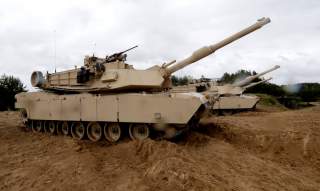 Large numbers of heavily armed, integrated and ready Abrams tanks would be needed for any kind of major ground offensive and “ready for war.” Achieving this is not always as easy as it may sound; Abrams tanks are complex war machines which rely upon a wide range of properly functioning systems and technologies, including ammunition, mounted weapons, armor, sensors and electronics. Abrams parts often need to be repaired, upgraded and effectively maintained. Replacing damaged parts or repairing war-torn elements of the tanks, such as its engine, armor, electronics or propulsion systems can be a challenging and lengthy problem.

“Our vehicles come into U.S. depots and they need overhaul. A lot of times they can end up sitting there for 12 months while waiting for a part, whereas if we just print it, we can get that part much quicker,” McWiliams told Warrior in an Army Research Lab materials laboratory, Aberdeen Proving Grounds, Md. The ARL work is part of Army Futures Command's Combat Capabilities Development Command,

Abrams tanks, in particular, are a focus of the ARL 3D printing effort, McWilliams said. The ARL lab has already 3D printed a replacement propeller fan for the Abrams tank.

“The Abrams has a gas turbine engine and in a desert environment, the sand gets sucked in and wears down the blades so the engine can no longer run,” he added.

While early on in its development, 3D printing is already showing great promise, as it utilizes an advanced and well-refined technical method using powdered material, lasers and systems able to shape layered material. Many of the materials used in the process are still being certified and qualified.

“You are laying down one layer at a time from a digital data file. You have a digital model of whatever part you want to make...then you make slices of it,” McWilliams explained.

McWilliams and his engineers are specifically working with metal powders and titanium alloys, which are placed in a container on one side of an elaborate manufacturing system.

“Material gets welded to and grown from a bar that spreads a 20micron to 60micron layer of powder and the laser, based upon the slicing strategy, will melt the material. The particle will essentially grow up,” McWilliams explained.

“At the end of the day you are kind of like Indiana Jones to find your part, digging it out of a sandbox,” he said.

While the current effort is, at the moment, focused upon the sustainment of existing vehicles, the technology is helping to architect a bridge toward its ultimate application to future vehicles.

“We envision this will lead into next-gen systems,” McWilliams said.